The RS3 is the smallest model in Audi’s sport-focused RS line-up, but that doesn’t mean it should be overlooked. Offered as a hatchback and a saloon, it combines rip-snorting performance, of the kind that can throw you back into your seat, with a great deal of practicality.

And the latest RS3 looks set to be one of the brand’s last petrol-powered hurrahs before it, like all others, ditches fossil fuels for electrification in the run-up to the 2030 ban on petrol and diesel-engined cars.

It’s fitting, then, that the new model boasts more power than ever (395bhp), resulting in a 0-62mph sprint time of just 3.8sec; that's two-tenths of a second faster than its predecessor and one-tenth of a second swifter than its rival, the Mercedes A45 AMG.

Audi has also introduced a raft of design and technology upgrades for the RS3 to underline its high-performance credentials and ensure it stands out from its Audi S3 understudy. 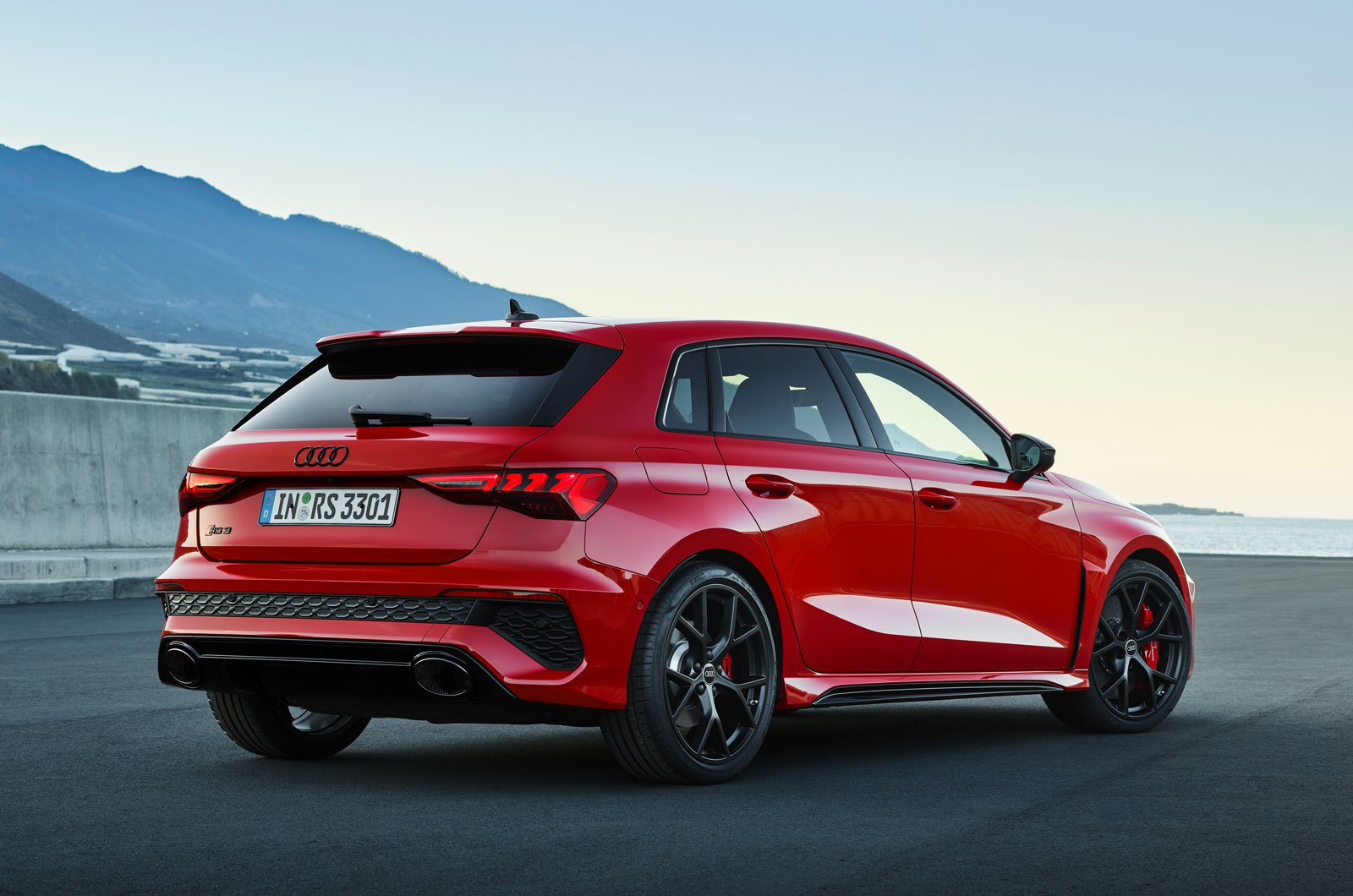 Power comes from Audi’s highly regarded five-cylinder turbocharged 2.5 TFSI petrol engine, a less-powerful variant of which is already used in the latest Audi RS Q3 and the Audi TT RS Coupé. In the RS3, it’s been given more low rev pulling power to help it achieve that blistering acceleration. It also has more oomph at higher revs too.

According to Audi, the improvement in acceleration over the previous RS3 is also partly due to the introduction of a torque splitter on the RS3’s rear axle. This sends grip to each wheel as it’s needed, giving the car an even more tenacious grip on the Tarmac.

Although the top speed of the standard RS3 is limited to 155mph, the Launch and Vorsprung editions will reach 174mph, and adding the RS Dynamic pack will enable them to hit 180mph.

A seven-speed dual clutch gearbox is standard; its gear shift times are shorter than the previous RS3's, giving it a sportier feel. The new RS3 should also sound even better, thanks to a flap in the exhaust that opens up more at different points in the rev range, depending on driving mode that’s been selected.

Two new driving modes have been added to the existing choice of five; RS Performance and RS Torque Rear modes are aimed at helping drivers make use of the added power and traction on the road and race track. 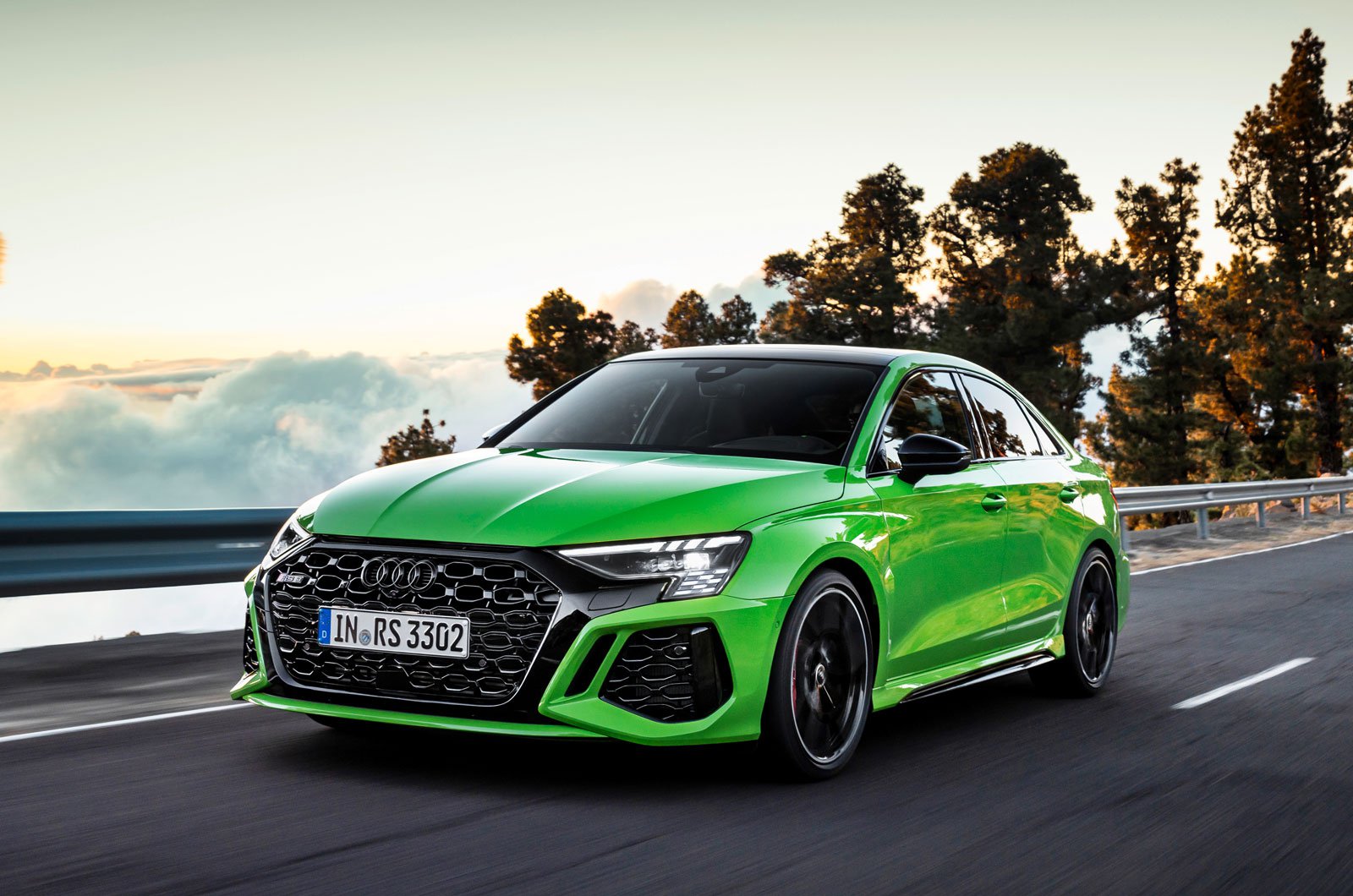 RS Performance mode controls over- and understeer to giving the RS3 tremendous agility and grip. It has a launch control mode with red, amber and green lights to signal when the maximum amount of power is available; that point is when you can floor the accelerator and get acceleration that’ll pin you to your Alcantara suede sports seat.

In RS Performance mode there are three different options for the steering and two for the suspension (comfort and sport), so the car can be optimised for use on a range of different driving situations from motorway cruising to twisty country lanes.

The second mode – Torque rear mode – is only really suitable for use on a race track because it allows more oversteer to enable you to drift it around corners. This is achieved courtesy of the aforementioned torque splitter, which shifts power to the left or right rear wheel, depending on which way you’re cornering.

To keep the RS3’s power in check, it’s fitted with larger brakes than before, and there’s the option of ceramic brakes that are more effective and lighter. 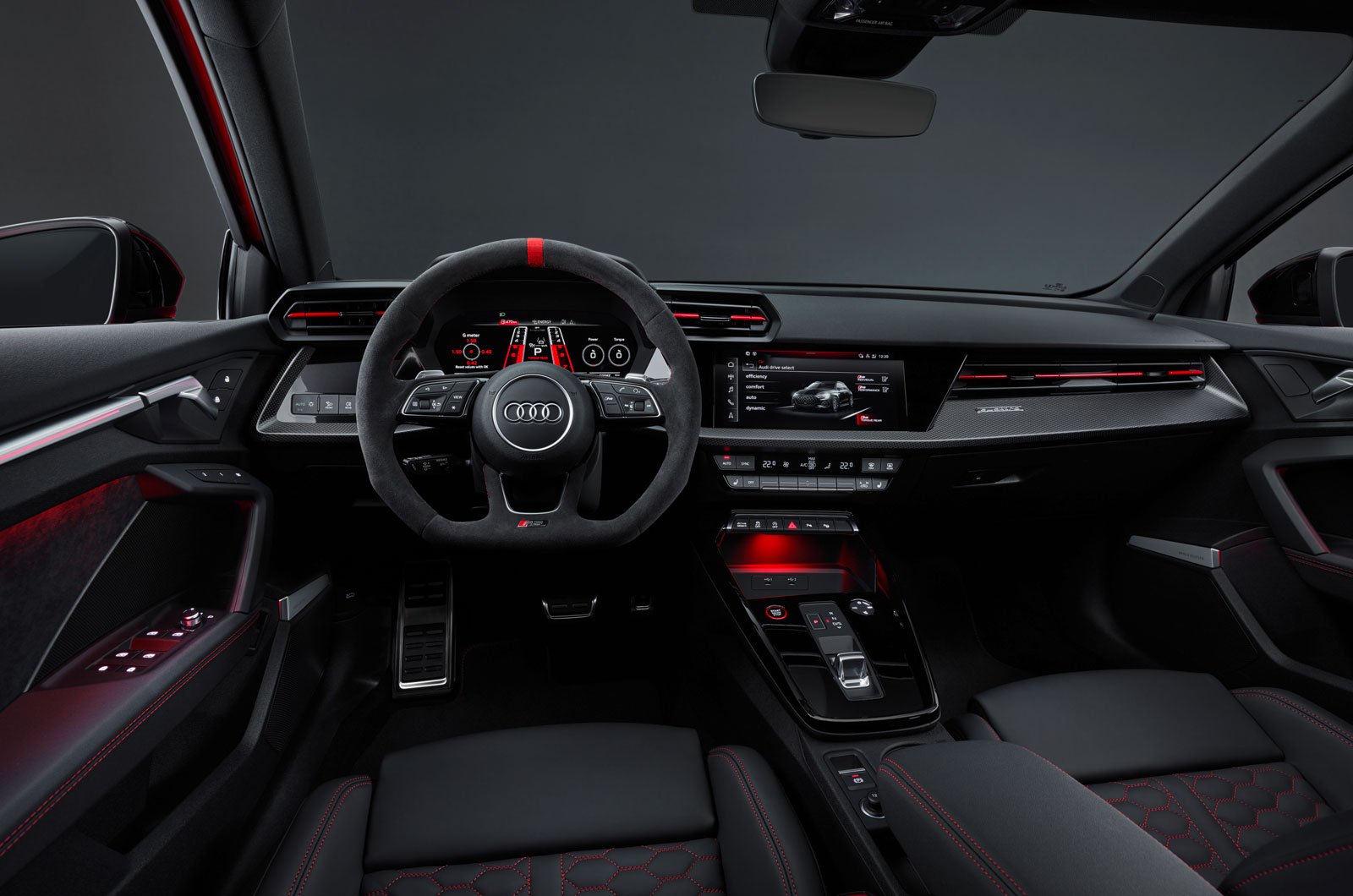 Inside and out there are plenty of design flourishes on the RS. On the outside, it has larger air intakes at the front, bespoke alloy wheels and a unique rear diffuser and spoiler. And on the inside, all RS3s are fitted with a three-spoke, flat-bottomed RS Sport steering wheel with gearshift paddles, and all models have RS sport seats.

Four trim levels are available: standard, Carbon, Launch and Vorsprung. All versions aside from standard get a carbon-fibre instrument panel and matrix LED lights that display a range of different images, including a chequered flag on one side and the RS3 logo on the other when the car is locked and unlocked. The four top trim levels can also be specified with carbon-fibre inlays on the mirror caps, and on the rear spoilers.

Befitting its race-inspired ethos, the RS3’s 12.3in digital dashboard shows revs in a bar graph and torque (pulling power) as a percentage. It also has displays for g-forces, lap times and acceleration from 0-100 km/h, 0-200 km/h, a quarter-mile and an eighth of a mile. The RS3 also has a head-up display for the first time. This projects useful driving information onto the windscreen in the driver’s line of sight where it can be read quickly and easily.

Options for individualisation also include two new paint colours: Kyalami green and Kemora grey, and in Carbon trim the roof of the S3 Saloon can be finished in Brilliant black for the first time. 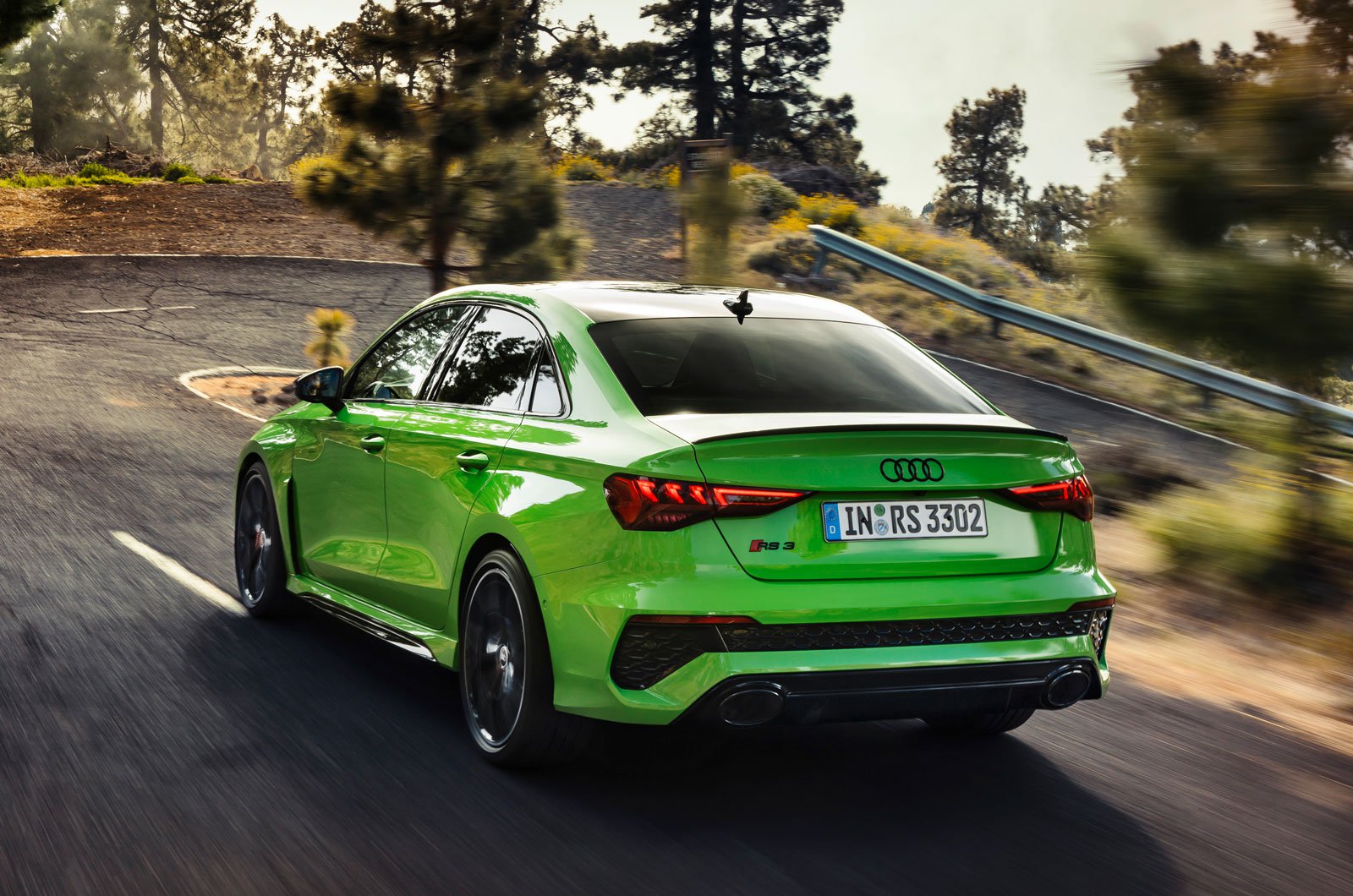 Prices for the RS3 start at £50,900; that's is a sizeable leap from the £46,350 price of its predecessor, but is roughly in line with the Mercedes A45 AMG and BMW M2 Competition. There are small discounts available on the Mercedes, but as all three models are likely to be the last conventional-engined performance saloons and hatchbacks from their respective brands, we expect all to remain highly desirable and able to command close to their full asking prices.