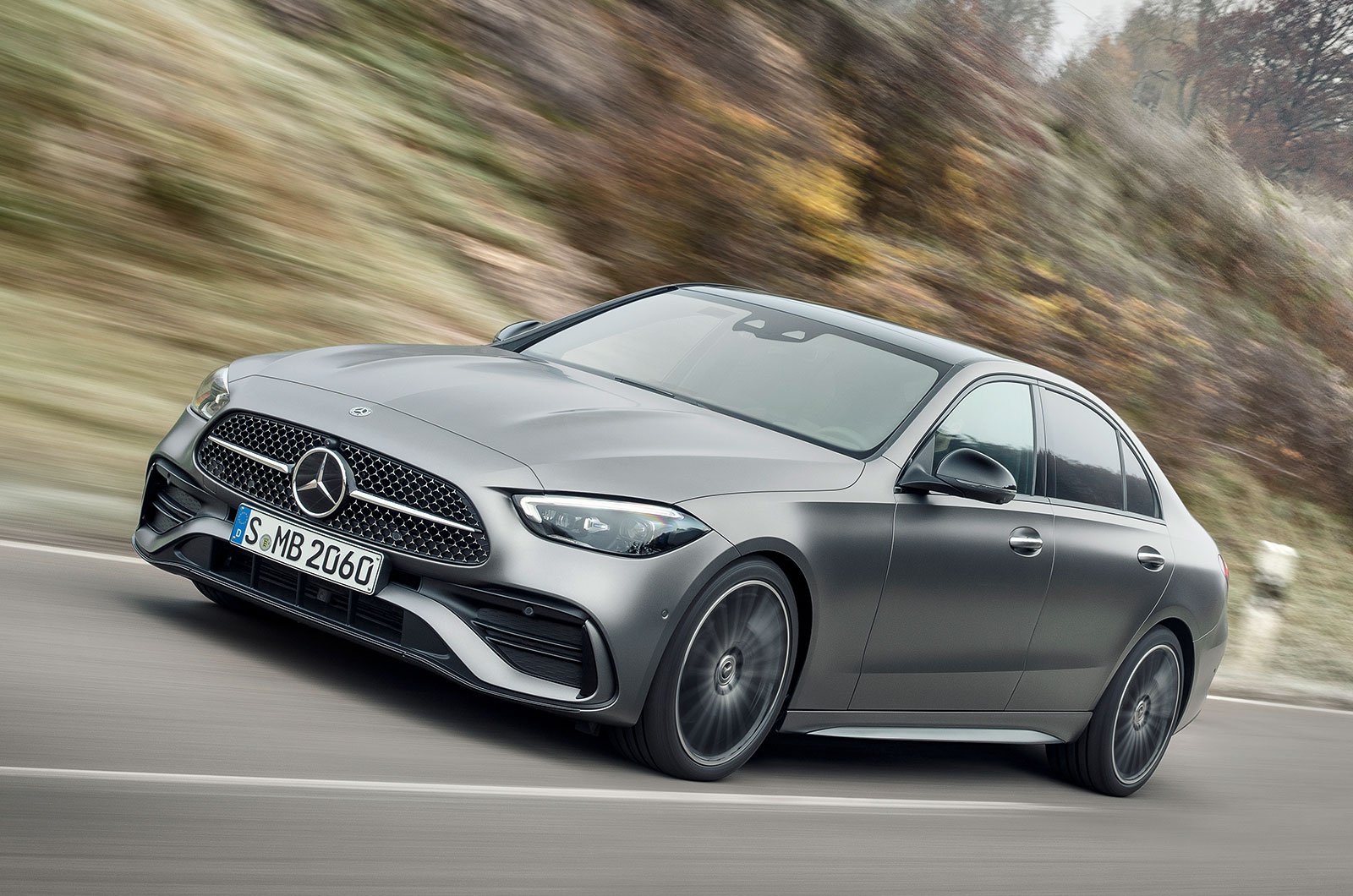 Some names are so powerful that they conjure up images on their own. Go and see a movie with Bruce Willis in it, for example, and you know that something is likely to blow up. Imagine the launch of a new Apple device and you know it’ll be sleek and cutting edge. The Mercedes C-Class holds a similar appeal; its name conjures images of comfort and technology, all wrapped up with the stylish looks of an executive saloon.

For a long time now, the C-Class and its key rivals, the Audi A4 and BMW 3 Series, have held sway at the top of the executive car class, but their grip isn’t as strong as it once was. From the Skoda Superb to the Tesla Model 3, and from the Jaguar XE to the Volkswagen Passat, challengers are numerous, strong and more diverse than ever. And that means the C-Class needed to evolve. 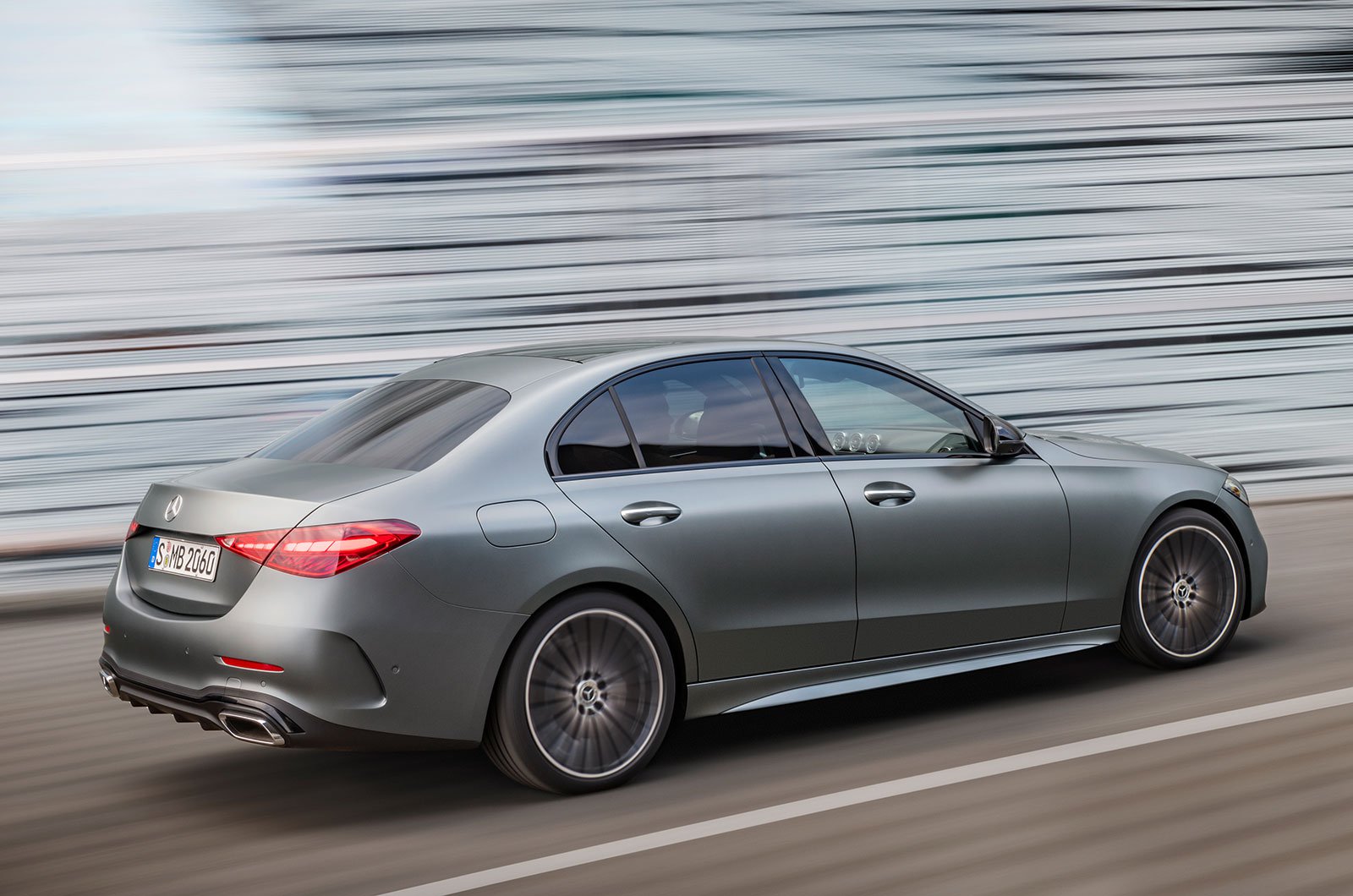 And evolve it has. While the styling changes are restrained, they lend it a more imposing appearance nonetheless, with sportier front and rear bumpers and a thinner front grille. LED headlights are now standard, with so-called Digital Lights an option; first seen on the S-Class luxury saloon, these can project warnings or markings onto the road ahead.

You’ll notice the biggest changes inside, where a Tesla-style infotainment screen dominates the dashboard. It measures 9.5in as standard but can optionally be upgraded to 11.9in – bigger than that of the class-leading 3 Series. Similarly, while a 10.3in digital instrument cluster is standard on every C-Class, you can upgrade this to 12.3in. These systems run the latest version of Mercedes’ MBUX infotainment system, which we’ve praised in other models for its graphics and advanced features. These include augmented reality sat-nav, which can overlay direction arrows onto a real-time image of the road ahead on the infotainment screen, plus natural speech recognition and online music streaming. A large head-up display, which can put the most useful information right in the driver’s line of sight, is optional.

A fingerprint scanner below the central display keeps sensitive information (such as emails accessible via the infotainment system) secure, and updates can be delivered over the air, without the need to visit a dealer. 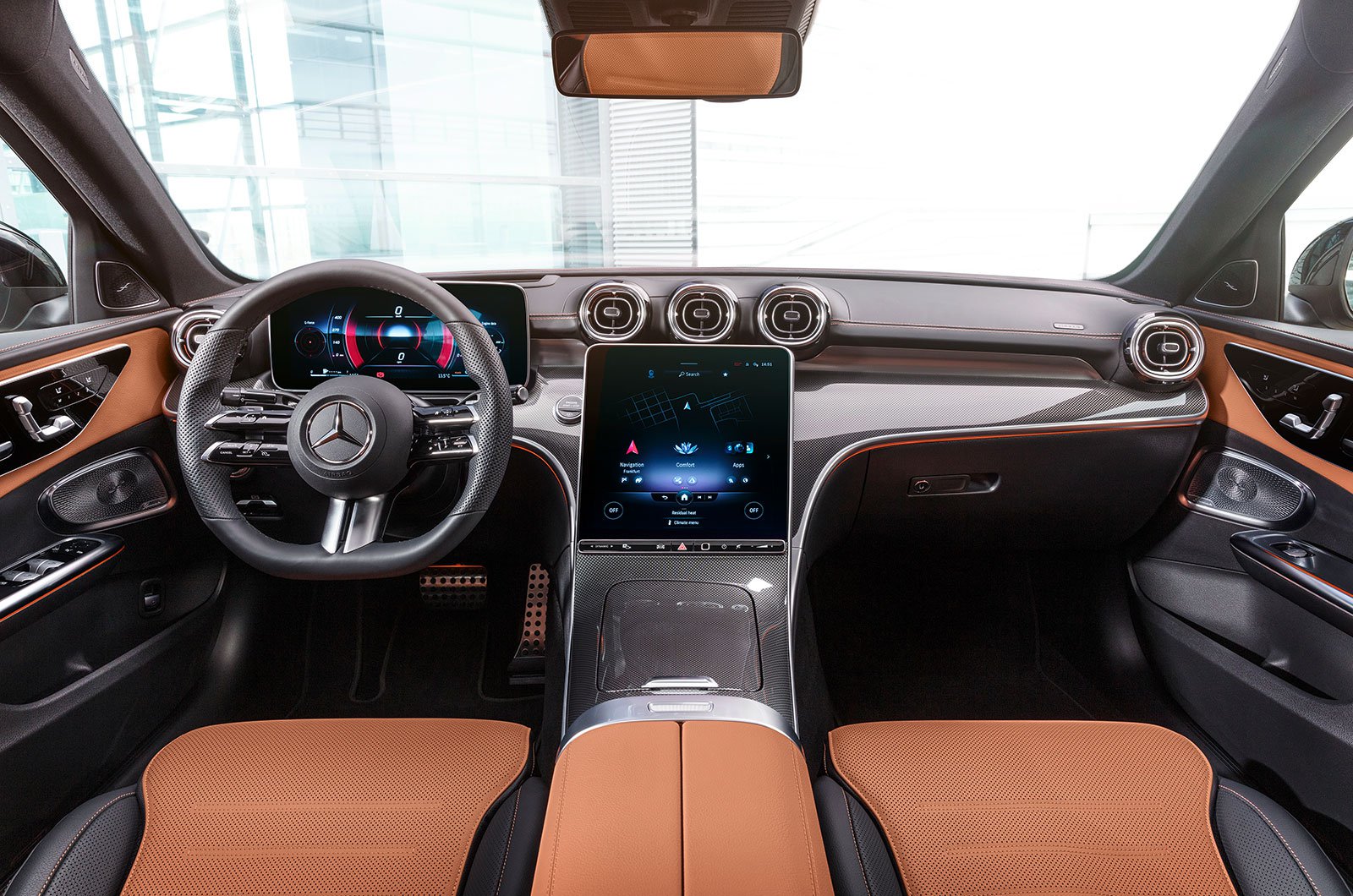 Every engine in the C-Class range is now a mild hybrid, allowing the car to ‘coast’ with the engine off in order to save fuel, plus it can deploy small amounts of electrical energy to help you get up to speed more efficiently – for example, when pulling away from traffic lights.

Whichever engine option you choose, a nine-speed automatic gearbox comes as standard, and the C200, C300, C220d and C300d can be had with four-wheel drive.

Anyone already emailing their company car fleet manager might want to wait until the plug-in hybrid arrives soon after the launch of the other versions. The C300e’s 2.0-litre petrol engine and electric motor produce 308bhp in total. Unlike rivals, it has a large, 25.4kWh battery and optionally supports rapid charging at a rate of up to 55kW. Officially, it’ll take you up to 62 miles on electric power alone, significantly beating the BMW 330e’s 37-mile range.

The C-Class’s suspension has been honed with the aim of improving ride comfort while assuring agile handling, and the C300e comes with air suspension as standard. Four-wheel steering is an option, but it’s yet to be confirmed that this will make it to the UK. At 455 litres, boot space is unchanged compared with the old car, which could take seven carry-on suitcases – the same as the 480-litre 3 Series. Capacity drops to 360 litres in the C300e, though. For those who need a more practical boot, a C-Class Estate will be offered.

The C-Class’s driver assistance technology now has more adaptive features and can keep you a set distance from other cars on urban roads as well as on the motorway. It can recognise a wider variety of road signs than before, too. There’s also a new centre airbag that’s designed to prevent occupants from hitting each other in the event of an accident. The new C-Class is expected to follow in the current model’s footsteps by costing slightly more than the equivalent A4 and 3 Series, with prices starting at around £36,000.

What's the new Mercedes C-Class going to be like, then? Well, What Car? recently got into the passenger seat of a late-stage prototype model to see how it's shaping up, and you can read our impressions by clicking the link below.