Long-awaited Land Rover Defender V8 gets a 518bhp engine and bespoke styling – but is it the one to go for?...

The Land Rover Defender V8 is what you get when you take Land Rover’s most iconic vehicle and combine it with one of the British brand's most iconic engines. It should, in theory, be a match made in heaven. After all, Jaguar Land Rover’s characterful V8 has real star quality, having stolen the show in the most exciting versions of the Jaguar F-Type sports car and Range Rover Sport luxury SUV.

Here it makes a healthy 518bhp and 461lb ft of torque, enough to power the short-wheelbase 90 model from 0-60mph in just 5.1 seconds, while the longer Defender 110 is just two-tenths of a second slower. That’s not bad for something with the aerodynamic properties of Blenheim Palace.

To cope with this extra power, Land Rover has fitted the Defender with beefed-up suspension, while a new electronic active rear differential and a ‘Dynamic’ mode for the terrain response system should also help increase the Defender’s agility in the bends. 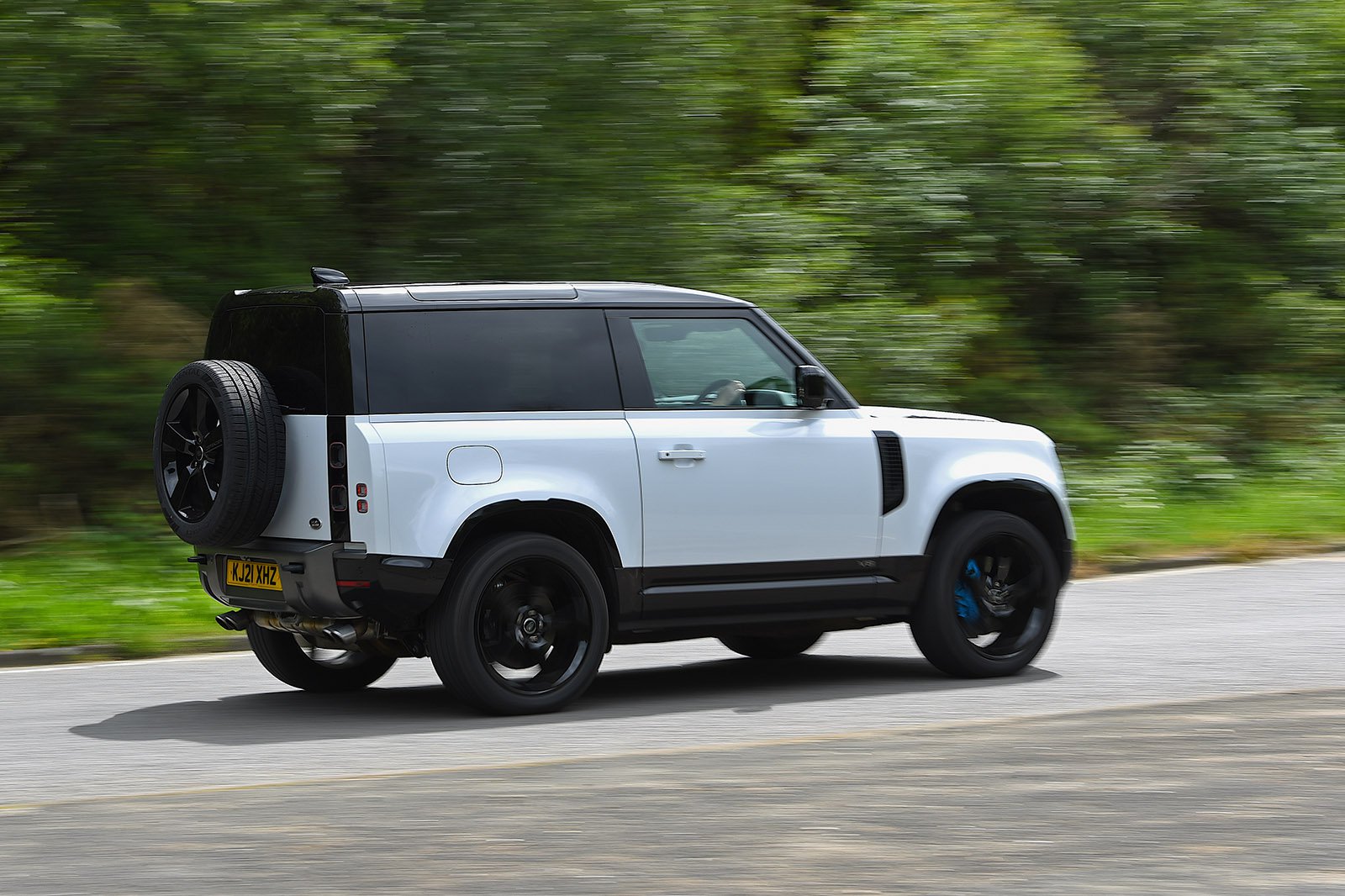 That all sounds great, but before we go any further we need to mention the styling. Now, we don't award marks for aesthetics here at What Car? – design is largely subjective, after all – but buyers of this ultimate Land Rover Defender might be disappointed by just how similar the V8 looks to any other Defender. Other than a small V8 badge on its flank, bright blue brake calipers and quad exhaust pipes, there's precious little to tell you that this is a near-£100k SUV.

Even the colour scheme is rather unadventurous – you can have white, black or grey. Considering that the Defender V8 is more likely to be seen in Sloane Square than Snowdonia, that might prove a disappointment.

Here’s a fun game. Point the Defender V8 at a straight section of road, select ‘Dynamic’ mode, plant your right foot to the floor and see how long you can go without giggling. We managed a couple of seconds. The 90 V8 feels every bit as quick as the official numbers suggest, and while the engine doesn’t sound as thunderous as it does in the Range Rover Sport SVR (that car gets a freer-flowing exhaust) it still makes a wonderfully satisfying noise.

Even the eight-speed automatic gearbox feels well-suited to this package; it’s the same as you’ll find in all other Defenders, although here you get steering-wheel-mounted paddles and the software has been tweaked to enable slightly quicker changes. Left in 'auto' mode, it does a good job of picking the correct ratio for the situation at hand, although we often found ourselves using the paddles for a little more control over proceedings. 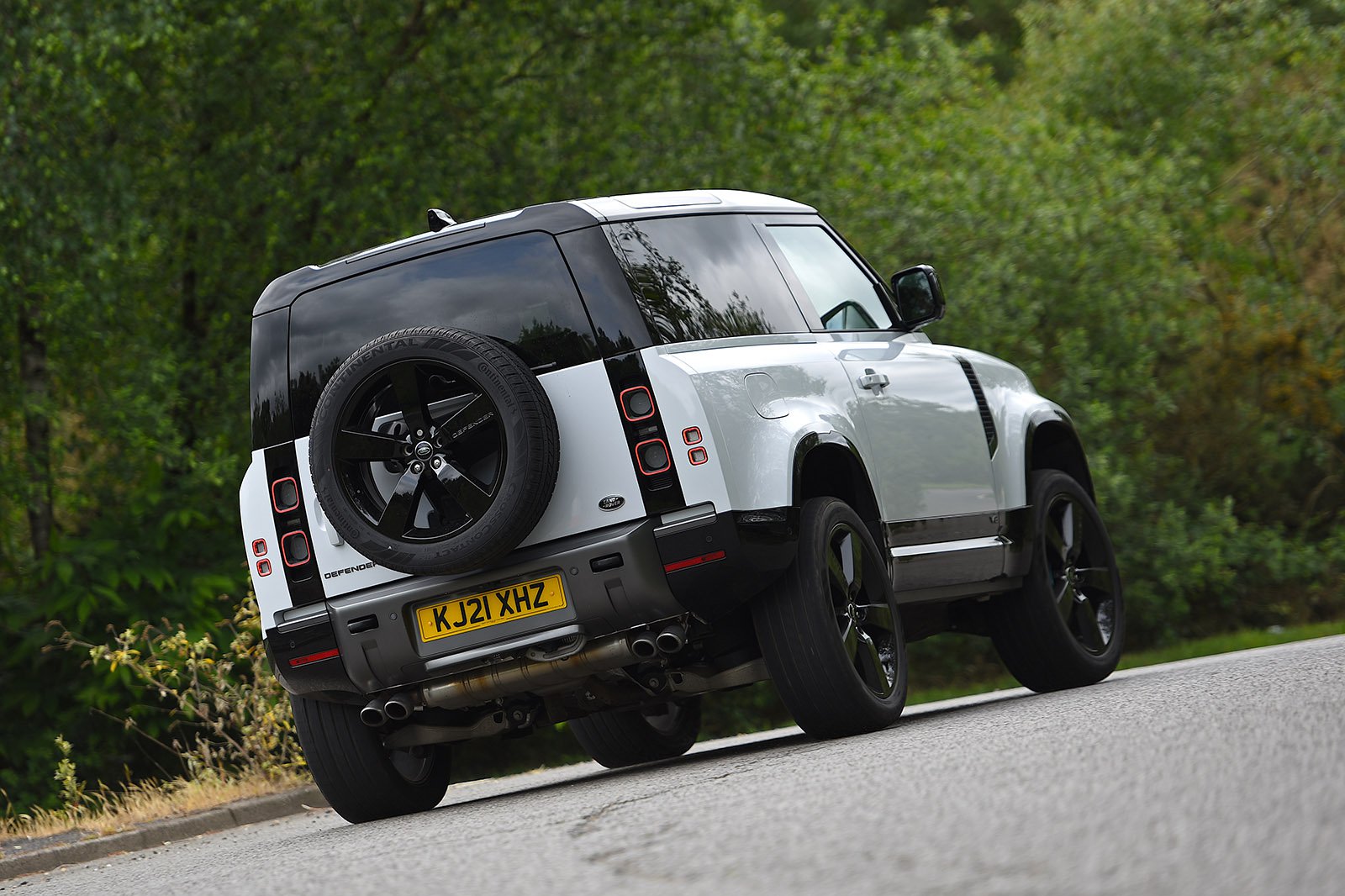 Talking of control, as we mentioned earlier, the Defender V8 has a bespoke suspension setup, although Land Rover is keen to point out that this is not one of its Special Vehicle Operations (SVO) products. So, forget the fact that this vehicle was spotted testing at the Nurburgring race track; the Defender V8 has been designed to be a comfortable cruiser first and a canyon carver second. It’s a shame, then, that it doesn’t really fit the bill as either.

Not only is the steering slow and vague, which makes placing the front of the car a real challenge, but body lean is particularly pronounced. This makes the Defender feel more cumbersome the harder you push. Grip is in relatively short supply around corners, too, even with the wide tyres and adaptive suspension, while the electronic stability control is quick to intervene and very blunt when it does so. That said, we wouldn’t recommend you turn the system off, because things can quickly get a bit wayward. The Defender is certainly fun off-road, but on a tight British B-road, not so much.

It isn’t a relaxing cruiser, either; there's quite a bit of road noise at motorway speeds and the ride never fully settles down, becoming downright choppy over broken surfaces. We should point out, however, that a Mercedes-AMG G63 jostles you around far more. 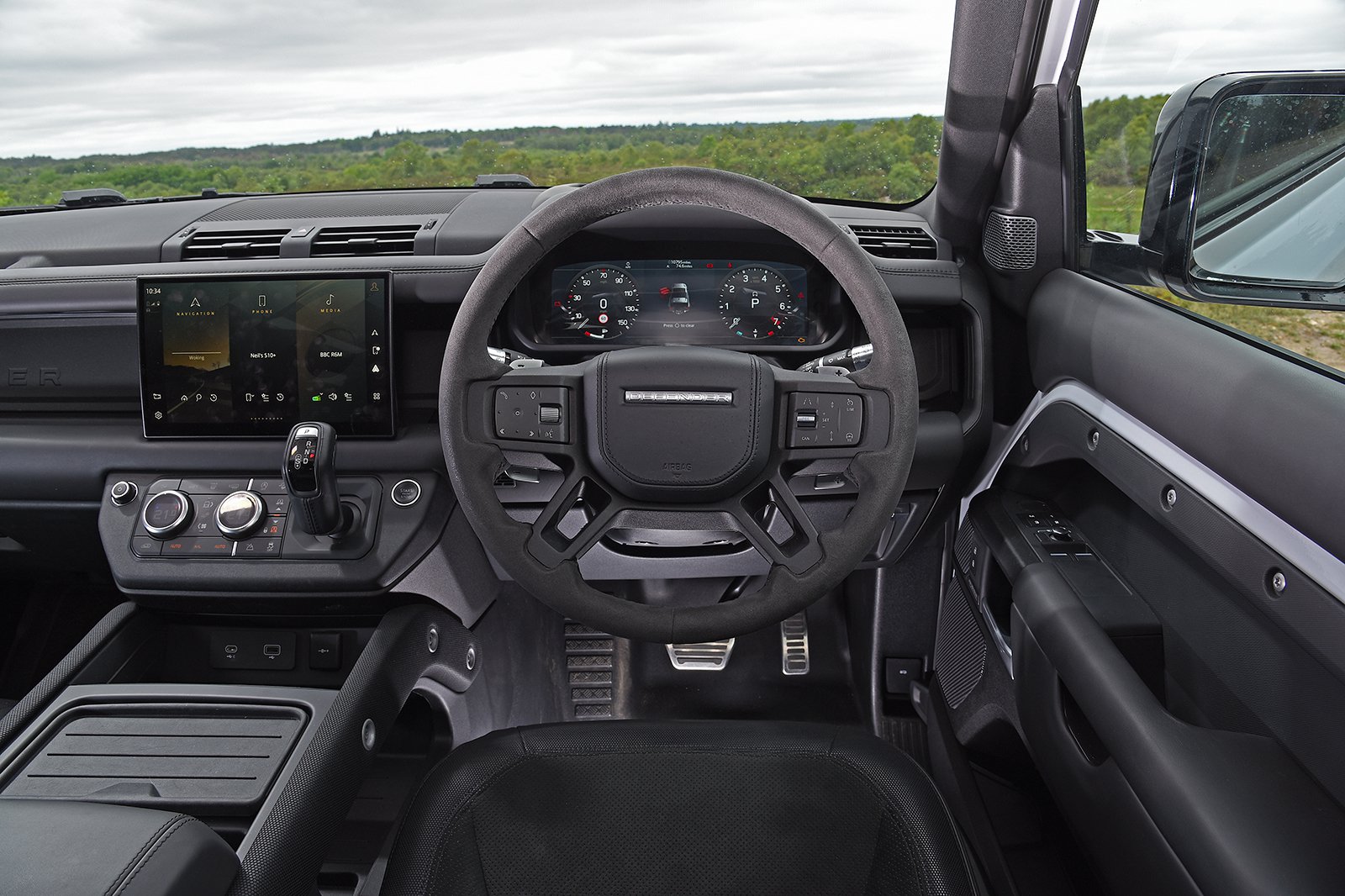 Like the exterior, the interior has been left a little neglected in the V8 transformation. The only real differences between it and that of a regular Defender are that the dashboard and steering wheel spokes are finished in a rough black paint, the steering wheel and seats are covered in suede (we wouldn’t want to get them dirty) and 'V8' is written on the illuminated treadplates. If you’re hoping for G63 levels of luxury, you’ll be somewhat disappointed.

At least you get the latest Land Rover infotainment system, with a crystal clear 11.4in touchscreen that responds swiftly most of the time, and has very impressive graphics. There’s also lots of functionality, including standard Apple CarPlay/Android Auto smartphone mirroring (so you can use your phone apps on the screen). As touchscreen systems go, it's very decent.

You can read more about the interior in our full Land Rover Defender review.