We’ve driven the new Porsche Taycan GTS on a track in an effort to find out if this version of the electric four-door coupé is the one to go for...

The middle is rarely a good place to be; you certainly don't want to be lumbered with a middle seat for a long-haul flight, and being the middle child supposedly means you get less attention than your siblings. However, GTS-badged Porsches are often among the very best, despite sitting in the middle of their respective ranges. So, does the new Porsche Taycan GTS – the first fully-electric model to feature those letters on its boot lid – continue that tradition?

Well, like other GTS Porsches, the Taycan GTS gets subtle styling tweaks that make it look more aggressive than cheaper variants, including tinted LED headlights, a reworked front bumper and gloss-black detailing. It's fitted with 20in black alloy wheels as standard, or you can upgrade to 21s like the items pictured on our test car.

The Taycan GTS also produces a little more power than the 4S below it, and comes with its own slightly beefed-up suspension set-up, which is more akin to what you get with the pricier Turbo models.

True, that headline power figure is only deployed briefly from a standing start when using launch control, but the GTS still produces 510bhp in normal driving. That's slightly more than you get with the track-focused Porsche 911 GT3, and more than enough to pin four occupants back in their seats when the driver puts their foot down

The GTS also has one motor for the front axle and one for the rear, which means four-wheel drive is standard to help you make the most of the available power. Meanwhile, Normal, Sport, Sport Plus and Individual drive modes allow you to choose how comfortable or stiff you want the Taycan to be. 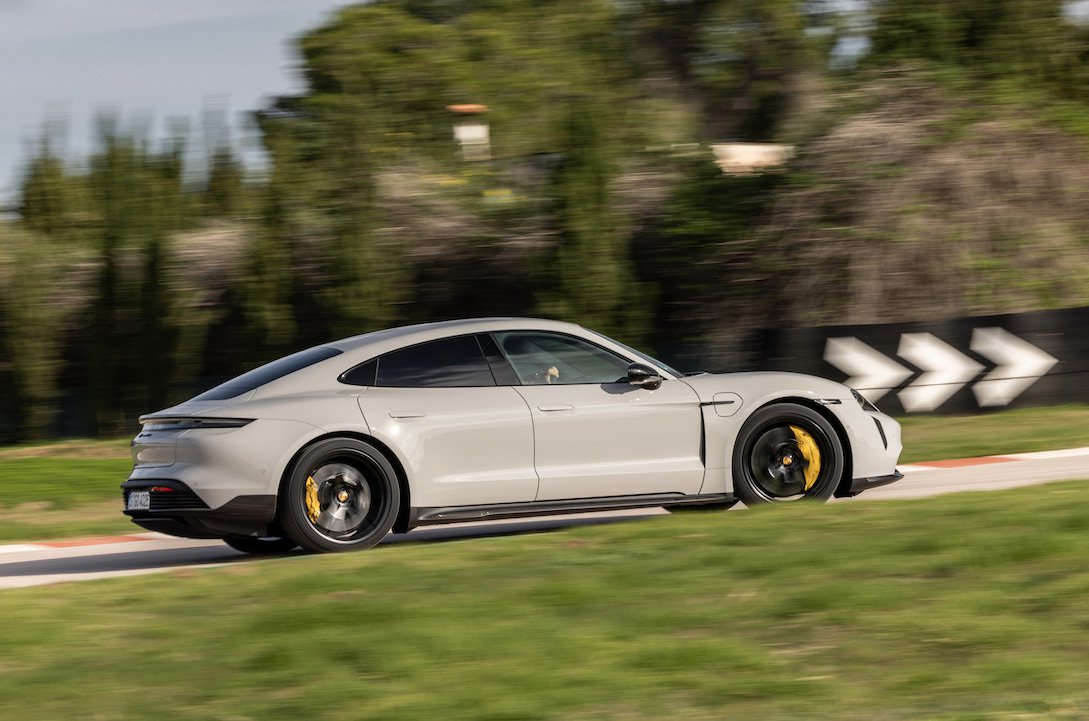 For this early drive, we tested the Taycan GTS on a track in Sport Plus mode, which lowers the adaptive air suspension and sets it to its firmest rate. It also gives you the heaviest steering option and the sharpest accelerator responses, but the electronic stability aids remain switched on to keep you in check.

In the dry, there’s plenty of grip on offer, and even though there isn’t much sensation through the steering wheel, the heavy weighting helps your inputs feel precise and quickly inspires confidence. 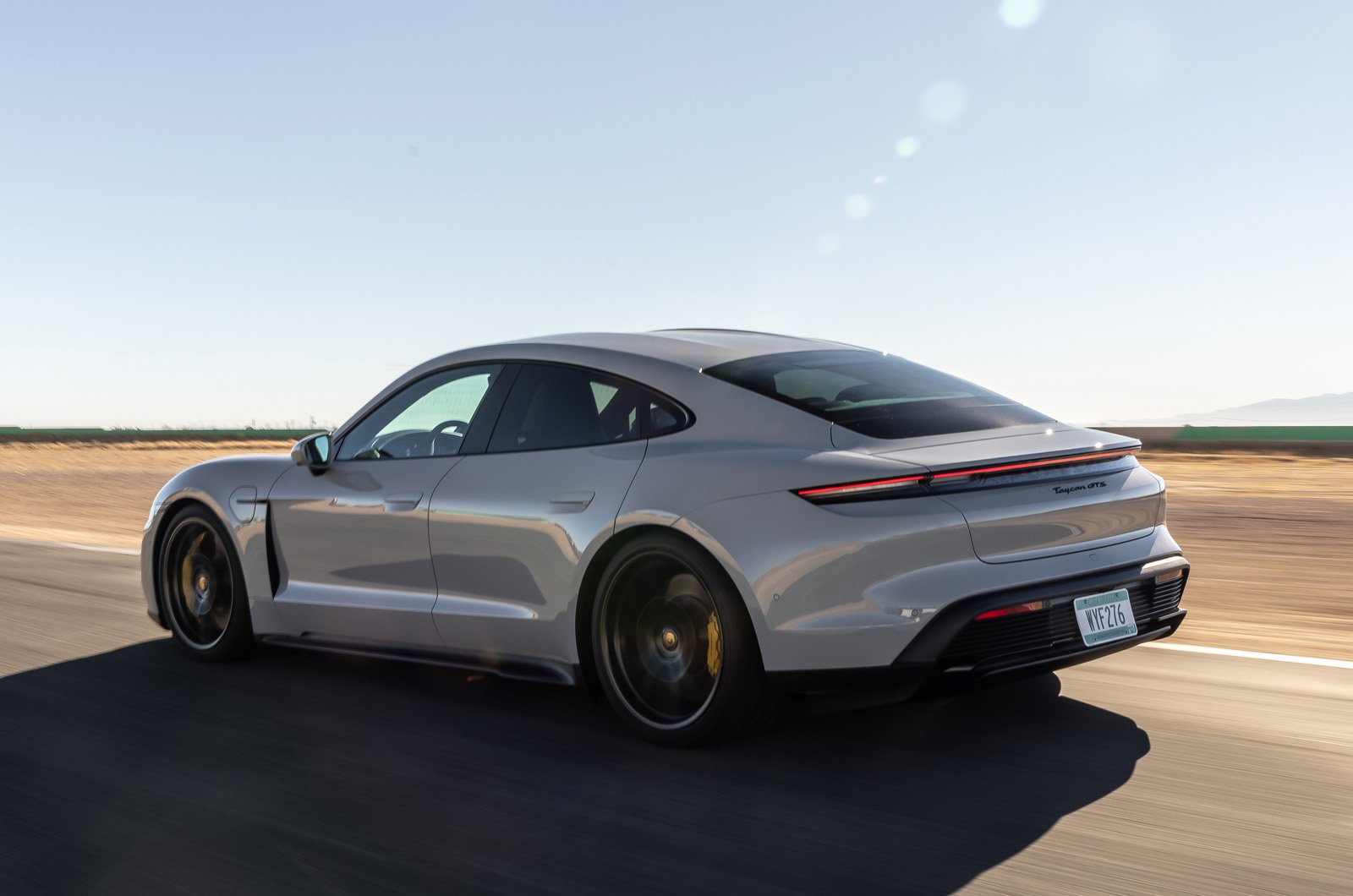 There’s also the option of rear-wheel steering, which tightens up the turning circle from 11.7m to 11.2m and helps sharpen up the way the Taycan turns into corners. This was fitted to our test car and made it feel like a much smaller vehicle than the Taycan is in reality.

You get bigger front brakes than you do with the 4S, with the option to upgrade to more fade-resistant ceramic ones, which stood up well during our track use. The augmented sound piped into the car to mimic an engine note (called Porsche Electric Sport Sound) is louder in the GTS and tuned to emit a slightly different, more theatrical tone as you build speed.

The GTS comes with the larger, 93.4kWh Performance Battery Plus as standard, but it’s also the first Taycan to receive a software update designed to improve efficiency. Its official 313-mile range beats the previous champion, the entry-level Taycan with the optional Performance Battery Plus, which nudged just over 300 miles. The 4S and Turbo models will get the same software update later in 2022, though. 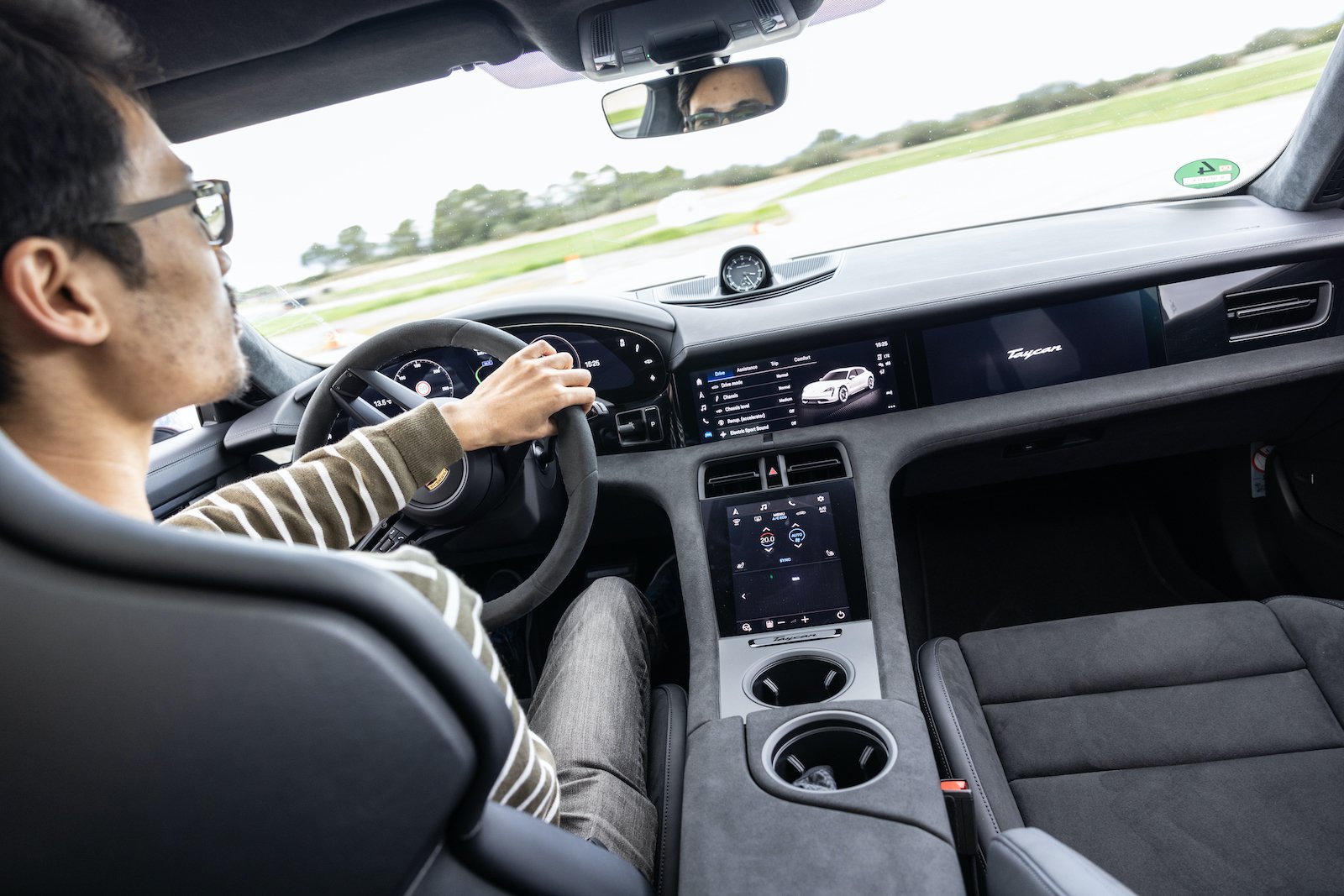 The changes to the GTS's interior are minor, with it featuring the same layout and infotainment system as the cheaper Taycan and 4S models. You can read more about the interior in our full Porsche Taycan review.

There is, though, additional use of Porsche’s suede-like material, Race-Tex, on the seats, steering wheel and roof lining, and the electric front seats have the GTS logo on the headrests.

A new option introduced on the GTS is a panoramic roof with Sunshine Control. This uses an electronically controlled film that can instantly switch from clear to a matt finish to block out glare from the sun, removing the need for a roller blind. The film is also divided up into nine segments and you can select which ones to use via the main infotainment touchscreen. It's a neat feature, but expect it will cost more than the current panoramic roof option costing just over £1100.