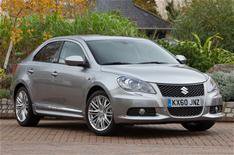 Suzuki has confirmed its Kizashi family car will arrive by the end of the year and will make a decision on a four-wheel-drive Swift supermini within three months.

The Kizashi - a Ford Mondeo rival - will come with a 176bhp 2.4-litre petrol engine, four-wheel drive and a CVT automatic transmission. Prices will start at around 24,000.

The car covers the 0-62mph sprint in 7.8 seconds and has a top speed of 134mph. Carbon dioxide emissions are 191g/km, while the Kizashi averages 34mpg.

What's it like to drive?
The Kizashi accelerates strongly from a standstill, and is certainly no slouch on the move, but the transmission is a little slushy, is slow to kick down and creates the typical thrashy noise of a CVT.

Refinement is good, while ride is acceptable, even if the suspension can crash a little. Although the steering could do with more feel, the Kizashi corners well.

Satellite-navigation will be the only option for the Kizashi, which otherwise has leather upholstery, heated and electrically-adjusted front seats, climate control, cruise control, iPod-compatible eight-speaker stereo, keyless entry/start and seven airbags.

At 4.65m long the Kizashi is around the same size as a Skoda Octavia.

Suzuki appreciates demand for a four-wheel-drive, automatic, petrol-powered family car will be small, so is targeting sales of only 500 cars a year.

Swift 4x4 driven
A four-wheel-drive version of the Swift supermini is also under consideration, and is likely to be given the green light by June.

Suzuki thinks around 500 buyers could be tempted by the car following the severity of the last two winters.

Compared with the standard Swift, ride height is increased by 25mm, but it still feels composed over broken road surfaces and corners well, with little body lean. A viscous coupling sends power to the rear wheels when the fronts start to slip.

Power comes from the standard 93bhp 1.2-litre petrol, which is willing when revved hard but feels a little lacking on hilly sections, particularly considering the 4x4 version is 90kg heavier than a standard car.

The additional weight means CO2 output increases from 116g/km to 128g/km, while fuel efficiency drops from 56.5mpg to 51.3mpg.