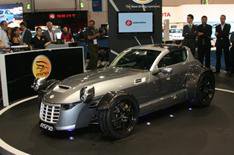 Behold the Lexus LF-A, a supercar that remains a concept car despite being launched in 2005 and contesting this year's Nurburgring 24-Hour race in front of 100,000 fans.

Powered by a mid-mounted 500bhp 5.0-litre V10 engine, the car has a top speed of 200mph. It oozes high-performance styling, too, with much of its body made from aluminium and carbonfibre to save weight.

Even the two radiators to cool the engine are rear-mounted to aid weight distribution. They feed air through ducts just above the rear wheelarches onto a rear spoiler, which is activated at high speed to create more downforce and increase grip.

So will it ever make production? Almost certainly - Lexus has invested a lot of time and money in developing the car to such a high level.

So when will it make production? Well, we've been predicting on sale dates for so long now that we've given up trying.