More for you |
What Car? Real Range: which electric car can go farthest in the real world?2020 Hyundai i20 small car revealed: price, specs and release dateRanked: The most reliable executive cars - and the leastFord Focus ST long-term test reviewCar recalls: what are they and what to do if your car is recalled
Home
News
8. VW Golf GTI
news 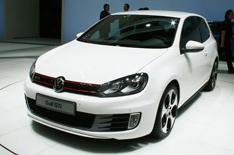 As production-ready concept cars go, this VW Golf GTI is right up there few think it's going to change much when it goes on sale in the middle of next year.

It's also 10bhp more than the previous-generation GTI, while carbon dioxide emissions have been trimmed from 189g/km to 178g/km. Average fuel economy will be 37.6mpg.

The car will have adaptive damping, which allows the driver to select between Comfort, Normal and Sport settings, and an electronic differential to maximise traction.

Modifications over the standard Golf include 18-inch alloy wheels, a flat-bottomed steering wheel, sports seats and silver highlights on the door trims.

A 265bhp four-wheel-drive Golf is expected to be launched later in 2009 to replace the current R32.

Why we didn't like it Okay, okay, it's sacrilege in some parts to citicise the GTI, but it just looks so, well, like the last one.