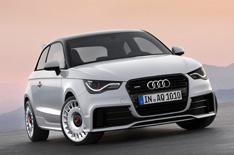 We're big fans of the Audi A1 because it appeals to both the heart and the head. However, this new A1 Quattro version is anything but sensible. Underneath all that in-your-face, rally-inspired styling is a raft of technical changes that have turned the A1 into something of a beast.

The main change is the 252bhp turbocharged 2.0-litre petrol engine that Audi says is capable of launching the A1 Quattro to 62mph in just 5.7 seconds. As the name suggests, this limited-edition A1 has four-wheel drive to keep all that power in check, plus hundreds of other new or modified parts.

What's the Audi A1 Quattro like to drive?
Unsurprisingly, it's very fast. Treat the throttle pedal like Audiintended, and the engine unleashes a fierce surge of acceleration that's guaranteed to have you smiling.

However, that's not the full story, because the A1 Quattro has something of a two-tier power delivery. It's hardly slow at low revs, but you have to get the engine spinning above 3500rpm before it really gives its best. We'd prefer a little more eagerness from the off.

The sound the A1 Quattro makes is disappointing, too. The exhausts are suitably snarly under hard acceleration, but most of that noise is drowned out by the strained, unappealing rasp of the heavy-breathing turbocharger.

Handling is an area where the A1 Quattro has strengths and weaknesses. On the plus side, it has immense grip in bends, and the standard four-wheel drive means you never struggle to transfer the engines power to the road.

However, the combination of the A1 Quattro's tiny footprint and a relatively tall body means it could feel more stable as you hammer through the bends. You never worry that its going to topple over, but you can feel the weight of the body shifting around as you change direction quickly.

The car has a tendency to follow the contours of the road surface, too, which can tug you off your desired line through corners.

The twitchy steering doesn't help, either; its fairly slow to react initially, but very quick thereafter, so you often find yourself dialling in the wrong amount of input to begin with, and then having to adjust it. Theres no denying that driving this car quickly is immense fun, but it also takes hard work and concentration.

It's hugely fun to drive, but the A1 Quattro also requires hard work and concentration

Ride comfort isn't one of the A1 Quattros strong points, due to that rock-hard suspension. Then again, in a hardcore car such as this, you wouldnt expect it to be.

Whats the Audi A1 Quattro like inside?
The layout of the dashboard is just like any other A1's, so the controls are simple to find and use. You'll find the same classy materials and high-quality assembly that all A1s give you, plus the same amount of space (plenty up front, not much in the back, but a reasonable boot).

The A1 Quattro's interior definitely has its own sporty character, though. This comes mainly from the heavily bolstered leather sports seats, but the flat-bottomed steering wheel, red rev counter and white needles also contribute.

A1 Quattro buyers also get a lot more standard equipment than other A1 buyers, which is just as well when you consider the price. Xenon headlamps, automatic lights and wipers, rear parking sensors, climate control, cruise control and an interior lighting package are all included.

Should I buy one?
Unfortunately, you can't. Only 333 A1 Quattros are being sold worldwide, and all of the 19 heading to the UK have already been snapped up.

Before you get too upset, though, bear in mind that the list price of this car is an eye-watering 41,020. That's ridiculous money for an A1, even one as fast and as focused as the A1 Quattro. It's also many, many thousands more than you'd pay for most hot hatch rivals, which are much more fun to drive.

Our reigning hot hatch of the year, the Renaultsport Megane 265 Cup, has similar power to the A1 Quattro, but costs 16,180 less. The Renault also happens to be one of the most thrilling cars that money can buy.

Alternatively, the brilliant BMW M135i has 64bhp more than the A1 Quattro, yet costs around 11,000 less.

Read the full Audi A1 review >>