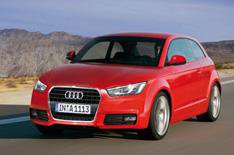 The Audi A1 has won the Reader Award for the most exciting new car of 2010 at the What Car? awards.

Whatcar.com readers voted in their thousands in our online poll, and it was Audi's premium small car that came out on top, fighting off a stiff challenge from the likes of Jaguar's new XJ executive car and Honda's sporty petrol hybrid, the CR-Z.

What Car? editor Steve Fowler said: 'A new, small Audi sounds like an enticing proposition and our readers seem to agree, voting it the most exciting new car to be launched this year.

'Although we haven't seen the finished car yet, a funky small car with an Audi badge on the nose and aimed directly at the Mini can't fail to succeed. It should be a strong contender for our Car of the Year Award in 2011!'

The production-ready A1 will be unveiled at the Geneva motor show in March.

What Car? Car of the Year Awards