More for you |
Every 5-star car on What Car?Used test: Maserati Levante vs Porsche MacanNew issue of What Car? magazine on sale nowMost and least reliable small SUVsRevealed: the car makers whose discounts have got bigger since lockdown
Home
News
Best discounts ever as car sales slump
news 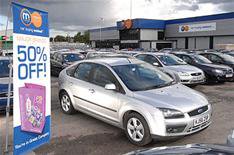 Now might be the best time to buy a car, because car manufacturers are offering bigger discounts than ever.

The discounts come after sales fell by 11.3% last year, according to the latest figures. The fall represents a drop of 272,212 car sales during the year.

However, the figure masks some of the current crisis the industry is facing, because sales only began to fall significantly in the latter part of the year.

The final registration figures for December showed a 21.2% drop in sales compared with the same month in 2007.

That means manufacturers are becoming increasingly eager to sell cars and buyers are being offered better deals than ever.

What Car?'s mystery shoppers are searching out the best deals daily, and you can find them by looking at our New car deals page.