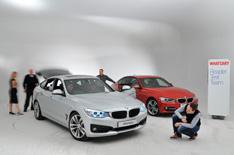 The BMW 3 Series Gran Turismo is designed to slot in between the regular 3 Series (saloon and Touring) and the larger 5 Series in BMW's executive line-up. What do What Car? readers make of it?

The 3 Series GT offers a raised driving position and more boot space with the seats up than even the 3 Series Touring - but it also costs more.

Will its blend of oddball styling, a premium cabin and greater practicality have appeal, particularly among company car choosers?

Watch the video below to see what What Car? readers thought about the car at an exclusive pre-launch event at our own studio in south London. The readers also had the chance to look at the current 3 Series saloon to see how the two compared.