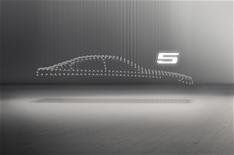 BMW has revealed a 'teaser' picture of its new 5 Series saloon.

The silhouette has been released ahead of the 5 Series saloon's official launch on November 23.

Familiar design cues
Little is revealed of the car's styling, but the picture does give clues towards BMW's familiar kinked rear pillar.

The 5 Series saloon will share a platform with 5 Series GT, and is expected to be slightly larger than the model it will replace, but weight-saving measures should mean it's no heavier.

The teaser silhouette has been created by using BMWs kinetic sculpture from its museum in Munich.