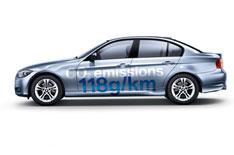 BMW has announced details of the new 316d ES - the cleanest and most fuel-efficient 3 Series ever.

The new model available only in saloon form is powered by a 115bhp version of BMW's 2.0-litre diesel engine. It has the full range of its EfficientDynamics features, including an engine stop-start system, brake energy regeneration and a gearshift indicator to make it as efficient as possible.

Business users will pay company car tax on just 13% of the car's value, compared with 18% for the 318d, which uses a 141bhp version of the same engine. For higher-rate tax payers that's a saving of £44 per month.

Deliveries start in September, but you can order one now.