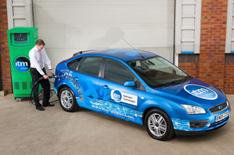 ITM Power PLC certainly thinks so, and is highlighting its technology in a Ford Focus that has been adapted to run on hydrogen.

What's more, the hydrogen is produced using a system that can be fitted in the average home. Using water and electricity, it overcomes the current absence of a hydrogen refuelling infrastructure in Britain by allowing owners to charge their own cars.

In its converted form, the petrol-engined Focus has a range of 25 miles on a single charge of hydrogen, which the company says is enough for the typical urban commute, and the car is capable of being switched back to petrol if the hydrogen supply is exhausted.

ITM says that with more research and current advances in technology, it hopes to extend the hydrogen-only range to around 200 miles.

Don't get too excited just yet, though - the systems are still working concepts, and ITM is talking to manufacturers and developers in an effort to get the system fitted to cars.

'It could become a production reality in less than a year, depending on how negotiations go,' said a spokesman.

'In mass production, we believe the parts could be fitted to a car for less than 1000, with the refuelling equipment costing less than 2000.'