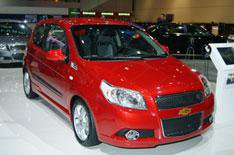 This is the three-door Chevrolet Aveo supermini, which will go on sale in September. It follows in the footsteps of the five-door model, which goes on sale in May.

Although the Aveo is based on the underpinnings of the car it replaces, the Kalos, it has nevertheless been thoroughly reworked. There is new exterior styling, new interior trim and new engines.

There has been an even more dramatic improvement inside. The Aveo features soft-touch plastics and higher-quality fabrics to create a more upmarket ambience than the Kaloss cabin.

Chevrolet expects the Aveo to become its best-selling model in Europe.

It will be powered by 82bhp 1.2-litre or 99bhp 1.4-litre petrol engines. The higher power unit will have the option of an automatic gearbox. Company officials concede that they may add a diesel to the line-up later.

No prices have been released for the three-door model, but it is expected to cost from about 7250.