Citroen and Peugeot get Mitsubishi ASX 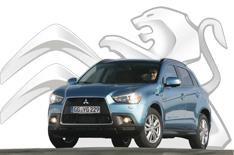 Citroen and Peugeot will sell their own versions of Mitsubishi's ASX crossover.

Under a new agreement signed between Mitsubishi and parent company PSA Peugeot Citroen the French brands will develop and adapt the ASX into a vehicle to go on sale in Europe in 2012.

The cars will be available in two- and four-wheel drive a two-wheel-drive version fitted with Peugeot Citroen's 1.6 diesel engine is expected to have CO2 emissions of 123g/km and do an average of 60mpg.

The deal has benefits for both companies: PSA gets an already-developed vehicle for a growing market segment, while Mitsubishi benefits from economies of scale resulting from the 100,000 extra cars it expects to make for Citroen and Peugeot each year.

Mutual benefits
It's not the first time that the three brands have created a deal such as this, the Citroen C-Crosser and Peugeot 4007 are re-badged Mitsubishi Outlanders, while the forthcoming electric cars from Citroen and Peugeot, the C-Zero and iOn are based on Mitsubishi's iMiev.