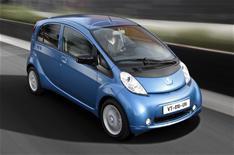 Prices for the Citroen C-Zero and Peugeot iOn electric cars have been cut by nearly 7000 to 21,216 after the 5000 Government grant is added.

Citroen has also almost doubled its outlets to sell the C-Zero from 11 to 21 dealerships. The Peugeot iOn will be offered in 23 of the car maker's dealerships.

Customers will also be given new contract hire rates, with prices starting at 249 per month, which is on a three-year, 30,000-mile deal.

The identical cars are both powered by a 64bhp electric motor, which uses a 16kWh lithium-ion battery that takes six hours to charge through a domestic socket.

The cars have a range of up to 93 miles on clear roads, and around 46 miles in a busy city environment.