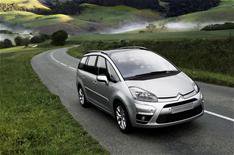 The recent face-lift for Citroens C4 and Grand C4 Picasso ranges brought a new look, more equipment and for the first time in the UK an e-HDi model. Combining a stop-start system with a 1.6-litre diesel engine and Citroens semi-automatic EGS gearbox, it's the most economical version in the new range.

Available in VTR+ and Exclusive trims, the car will average up to 58.9mpg in the C4 Picasso, and 57.6mpg in the larger C4 Grand Picasso that we've driven. Emissions are 125g/km and 129g/km respectively.

First impressions of the car are good, the stop-start system going through its routine smoothly.

Unlike other systems, where you depress the clutch to restart the engine, in the Citroen which has just two pedals, it's lifting off the brake pedal that kicks the engine back into life. The car then pulls away cleanly in first gear.

As a result, these e-HDi versions will average some 4mpg more than the equivalent HDi model; at the same time, the reduced CO2 emissions drop it down a couple of company car tax bands, although the effect of that is offset by the extra £700 the e-HDi models cost to buy.

Takes some getting used to

That's not the only price to pay, however, because you also have to get to grips with the EGS gearbox and thats not easy. Both the automatic and manual modes take plenty of getting used to.

Of the two, the manual mode is the easier, because that gives you more control. However, it will take time to co-ordinate everything: your hands on the paddle-operated gearlevers, your feet on the accelerator, and the automatically operated clutch. Until you do, its easy to find yourself nodding back- and forwards in the drivers seat, as the car struggles with too much or too little power.

Stick the car in automatic mode, and because only the accelerator is under your control, things are far less smooth. Not only does the system seem to change gear at unexpected moments, it can be hard to keep driving smoothly particularly at low speeds pulling away from junctions and in town, for example.

Otherwise, the face-lifted car remains much like the previous car: the soft suspension majors on comfort, but to the detriment of body control and driver enjoyment; the dashboard has an unconventional, but effective, layout. The practicality is very impressive, though, with room for seven (although the rearmost seats are best left for children) and five rear seats that fold flat into the floor.

The C4 Grand Picasso remains a decent MPV, but the e-HDi models are not the best in the range.