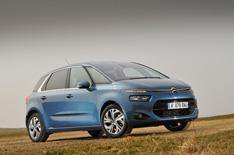 The latest set of crash test ratings have been released by safety testing body Euro NCAP, with the Citroen C4 Picasso and Honda C-RV both being assessed.

The new Citroen C4 Picasso earned five stars. It gained particular recognition for its ability to protect occupants of different sizes, no matter which seat they were in. However, it was marked down for pedestrian safety, where poor protection would be given to the head of anyone hit by the front of the car.

The only other car to be tested was the Honda CR-V, which was also awarded five stars. Its passenger protection was highly commended, but the CR-V lost points because installing child seats is too complicated.

Mitsubishi was praised for its Forward Collision Mitigation system. FCM works at up to 180kmh and uses radar to detect objects up to 200m in front of the vehicle. If the system senses an imminent collision, it first provides audible and visible warnings. If the driver doesnt react to these, the brakes are automatically applied first moderately, then firmly, to avoid or reduce the severity of an impact.

Fiat City Brake Control works between 5kmh and 30kmh. As with FCM, it senses obstructions and prepares the brakes. Again, if no action is taken by the driver, the car stops itself.