Citroen DS4 and DS5 to be crossovers 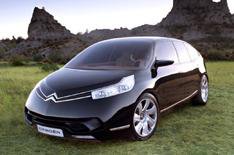 Citroen will launch its upmarket 'DS' range later this year, when the DS3 makes its debut in production form at the Frankfurt motor show.

The DS3 was inspired by the DS Inside concept car, and Citroen insiders have told us that many details of the concept will make it into the production range.

Although the textured leather roof isn't viable, a similar vinyl option is a possibility.

Mechanically, the DS3 is related to the next-generation C3 supermini, which will also make its debut at the Frankfurt motor show.

Both cars will share the same underpinnings and powertrains, including the 150bhp turbocharged 1.6 petrol unit fitted in the DS Inside. However, 'every body panel will be different', according to Citroen not least because the DS3 will be a three-door supermini and the mainstream C3 will be five-door only.

DS4 and DS5
What of the DS4 and DS5 that were also promised by Citroen? As their names suggest, they will be mechanically related to the C4 and C5 ranges, but they will be even further differentiated from their relations than the DS3 and C3.

A Citroen spokeswoman told us that the DS4 is inspired by the C-Sportlounge concept car and will have a high-riding crossover feel.

The C-Sportlounge (2005) was a coupe/MPV, which also influenced the styling of the latest C4 Picasso. Such a model would supplement the continuing C4 hatchbacks and Picasso as well as give Citroen a rival for the likes of the Nissan Qashqai and Peugeot 3008.

The DS5 will also have a crossover character: Citroen references the BMW X6 as an example of a similar coupe/SUV. It will be derived from the Hypnos concept car (revealed at the Paris motor show last autumn)

Although the production version will not get the rear-hinged 'suicide' rear doors, or colour-changing upholstery, it will have a very similar outline as well as the option of a diesel-electric hybrid powertrain.