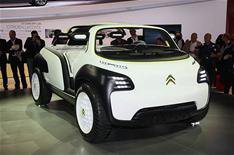 Vying for the 'least likely to make it into production' award at this year's Paris motor show is the Lacoste concept car.

What is it?
Conceived to 'cultivate boldness, creativity and optimism', this four-seater has no doors, no hard roof and a retractable windscreen, which is supposed to 'heighten the senses' while you're on the move.

It's part Mini Moke, part beach buggy, but with an inflatable roof stowed in the spine that runs along the middle of the car.

The rear seats slide into the boot to create more luggage space for carrying the full gamut of weekend fun.

Although there are no production plans for the Lacoste, it's possible that some of the more down-to-earth design elements might reappear in a future small Citroen.