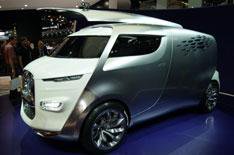 Citroen has a knack for producing interesting concept cars and the Tubik is no exception. Citroen describes it as an 'executive shuttle' designed to 'make travel meaningful and enjoyable'.

The Tubik concept car's styling has been partly influenced by Citroen's Type H van, which was produced between 1947 and 1981. The Tubik has a futuristic look, however, with a front section that stands apart from the main body and an unusual two-tone finish.

At 4.8 metres, it's the same length as a Ford Galaxy, but is significantly taller.

The interior has nine 'modular' seats, in three rows. Each seat moves independently and a number of layouts are possible.

The first row can face either forwards or backwards. The middle row can seat three people, be converted into a small table, or fold onto the last row.

The driver sits in an area Citroen calls the 'cyclotron' a system that groups the seat, pedal assembly, steering wheel and circular head-up display in one circular form.

Citroen isn't likely to build a production version of the Tubik, but the styling particularly at the front gives a clue to design elements that could appear on its future models.