More for you |
Used test: Peugeot 5008 vs Seat Tarraco Best and worst large SUVs 2020Every 5-star car on What Car?Confessions of a paramedicBest cars for less than £350 per month
Home
News
Citroens and Peugeots to differ more
news

Citroens and Peugeots to differ more 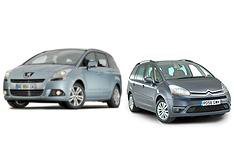 Citroens and Peugeots will be 'more different' in the future, according to the new boss of PSA, the parent company of both car makers.

Jean-Marc Gales, who is also Peugeot's CEO, said that PSA is redefining the DNA of both brands and what they should mean in the future, without ignoring their strong history.

Gales explained: 'You should really drive a Peugeot, while Citroens are more about creativity.

'It's clearly seen in the Peugeot 5008 and Citroen C4 Picasso. The 5008 is more geometric, while the C4 Picasso is more rounded, more Citroen-like.

'Inside, the 5008 has a more traditional and clear design, whereas the C4, with its central instruments, is more different.'

Our first drive of the 5008 confirmed the different directions of the brands, with the 5008 being more driver-focused and the Citroen softer-riding and more comfort-oriented.

Gales described the new Citroen C3 and C3 Picasso as 'typically Citroen' and said that he couldn't imagine a Peugeot version of the C3 Picasso. Equally, the new Peugeot RCZ coupe would not be seen as a Citroen.

Different looks similar prices
While both the look and feel of Citroens and Peugeots will be more different in future, prices are set to be similar. Emissions, quality and safety standards will be standardised across both brands.

The future
Peugeot is undergoing a brand re-evaluation process, the results of which will start to be seen from next year.

According to Gales, cars from Peugeot's heritage that the company should draw on include the 504 Coupe and Convertible, the 406 Coupe and the 205 GTi. When quizzed about Peugeot's future design direction, he said that the new 5008 gave big clues.

Gales also promised that more development work on Peugeots would be carried out in the UK at an earlier stage in the development process: 'At the moment, work done in the UK is too late,' he said.

Electric cars are high on Peugeot's agenda, with the iOn (Peugeot's version of the Mitsubishi i Miev) to go on sale next year and a decision on whether the show-stopping BB1 concept car, shown at the Frankfurt motor show last month, will make it into production is due soon.