* New sensor networks being set up * Cars will tell each other their speeds * Accidents could fall as a result... 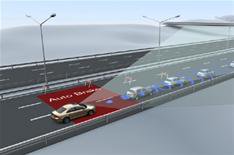 New technology could dramatically cut the risk of having a road accident.

Vehicle sensors are being developed that can communicate with each other, rather than needing to pass information to a central computer.

This saves processing time, which means that future vehicles could monitor each other's speed and position.

'We may soon go beyond just communication to using the network to interact with the environment,' Professor PR Kumar of the University of Illinois told the BBC.

'For example, cars on a motorway may talk to each other and find out each others' speeds. So a sensor in that context could just be the speedometer on a car, which could talk to surrounding cars. These cars could then co-operate with each other to avoid accidents.'

These 'embedded sensor networks' represent a shift away from computers communicating purely over a network to sensors which communicate with each other.

Longer-term, Kumar says a network could be set up where computers are able to act on the information they receive from the sensors. This could mean, for example, reducing speed in advance if slower traffic conditions are detected.