More for you |
Every 5-star car on What Car?Used test: Maserati Levante vs Porsche MacanNew issue of What Car? magazine on sale nowMost and least reliable small SUVsRevealed: the car makers whose discounts have got bigger since lockdown
Home
News
Company car drivers take tyre risks
news

* Nearly 25% of replaced tyres are illegal * Almost a quarter replaced at legal minimum * Advice is to change tyres when tread hits 2mm... 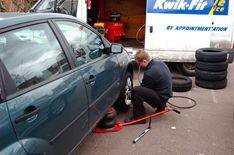 Almost a quarter of company car drivers are driving their vehicles on illegal tyres, according to a new survey.

The survey, conducted by Sandicliffe Motor Contracts, revealed that, of 1800 tyres replaced between September and December last year, 24.7% had worn below the legal limit of 1.6mm. A further 28.7% of tyres were replaced on the legal limit.

When asked, 29% of those whose tyres were on the legal limit admitted they were waiting until they reached 1.6mm before getting tyres changed.

This is despite advice that tyres should be replaced when they reach 2mm of tread.