* Fifth rise in crash rates in a row * A result of more foreign drivers in UK * Crashes with Polish drivers top claims... 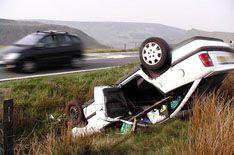 The number of crashes involving foreign drivers has risen for the fifth successive year.

Statistics from the Motor Insurers Bureau show that insurance claims involving foreign drivers have grown every year from 2001 to 2006.

The rise is largely because of the greater number of drivers from European Union countries who are now resident in the UK. Around 270,000 have moved here in the last six years.

In addition, one in seven HGVs on UK roads is from another EU country.

The number of crashes involving foreign drivers or foreign-registered vehicles has risen in parallel with the greater number of vehicles on the roads.

In terms of accidents, drivers from Poland top the crash table, with 16.6% of all claims.

However, the largest increases in claims involve drivers from Lithuania, Latvia and Estonia.