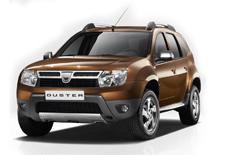 Dacia has confirmed that its Duster SUV will reach the UK in late 2012. Although similar in size to a Nissan Qashqai, the Duster could cost as little as 11,000.

Renault which owns Dacia - has announced that it will sell the Duster as a Renault in India, so the go-ahead for right-hand-drive production is assured.

Weve already driven the Duster, which has been on sale for more than a year across Europe. Right-hand-drive production has been delayed, however; Renault previously planned to launch the Dacia brand in the UK in 2008, but postponed this due to demand for its cars in other markets.

The Duster will be available with a choice of 1.6-litre petrol or 1.5-litre diesel engines and front- or four-wheel drive. Prices have yet to be confirmed, but Renault says that they will be aggressive. The entry price could be as low as 11,000, meaning that four-wheel-drive versions would start at around 13,000. Standard equipment is likely to be basic, with air-conditioning and alloy wheels reserved for higher-spec models.

Dacia plans to launch the Sandero supermini in the UK in early 2013. Again, prices and trim levels havent been confirmed, but the entry-level model should cost around 8000.