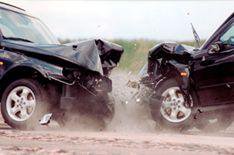 By the time we get to the motorway, we're in 'holiday' mode and safety is far from our minds, but here are a few arresting stats to think about:

• More people have been killed on Britain's roads since the Second World War than the number of British soldiers killed on active service during the war.

• The annual carnage on the roads in the UK each year is equivalent to 20-30 average commercial aircraft crashing.

• Each of us has a 1 in 17 chance of being killed or seriously injured in a road crash.

However, by adopting the few simple rules outlined on the next page, your journey should be safe as well as enjoyable.