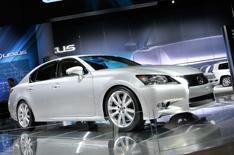 Lexus GS
What is it? Fourth-generation BMW 5 Series rival
Price from 36,000 (est)
On sale June

Lexuss forthcoming GS has a new-found aggression. Theres a much bolder look than the current car and GS450h F Sport versions have the handling to match, thanks to adaptive suspension and rear-wheel steering. Entry-level models arent as nimble, though.

The introduction of a new V6 petrol version provides a much lower starting price, but the 2.5-litre engine is weedy. The GS450h combines a 3.5 V6 petrol engine and an electric motor for a combined output of 338bhp and is much quicker.

The cabin is well built and has lots of leather and high-tech toys, but some of the switchgear looks cheap. Space has improved, but the GS still isnt as roomy as its German rivals, either.

Mercedes CLS Shooting Break
What is it? A more practical take on Mercs E-Class alternative
Price from 55,000
On sale End of 2012

Mercedes is targeting Audi A7 Sportback and BMW 5 Series GT customers with the stylish estate version of its latest CLS.

The Shooting Break was previewed at last years Beijing motor show, but its since been confirmed for production and has recently been spied testing.

The new model wont rival the E-Class Estate for load capacity; instead its designed to offer the CLSs looks with a touch more practicality. Itll get the full line-up of engine options, too from 2.1-litre four-cylinder diesel power up to a 5.5-litre twin-turbocharged AMG variant.

Mercedes S-Class
What is it? Cutting-edge technology on Mercedes flagship
Price from 63,000
On sale December

Mercedes top-of-the-line saloon has always been the first to get some of its leading-edge technology, and that will apply for the next generation of the S-Class when it arrives towards the end of 2012.

The new S-Class is expected to take several styling cues from the F700, a concept car from the 2007 Detroit motor show. It will also be influenced by the F 125! concept car, shown at the 2011 Frankfurt motor show.

Mercedess latest V6 and V8 engines will power the new car. Initially at least, UK buyers are unlikely to be offered the four-cylinder S250 diesel, but this engine will feature in one of two planned hybrids. The other will mate a V6 petrol engine to the electric motor.

Kit is likely to include a pair of video cameras incorporated in the rear-view mirror which read the road ahead. Theyll actually be able to analyse the road surface and make instant, tiny changes to the cars suspension system. Mercedes claims the tech, called Magic Ride Control, will halve the amount of body movement that exists in the current S-Class.

The cabin will take its lead from the F800, a smaller concept car shown at this years Geneva motor show. It featured a much less cluttered design, with greater use of natural materials such as leather, wood and aluminium, rather than plastic.