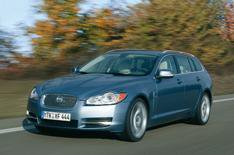 This computer-generated image shows how a Jaguar XF estate might look.

Although Jaguar hasn't confirmed it's going to build other variants of the award-winning Jaguar XF, it is expected to expand its range to appeal to as many buyers as possible.

As well as an estate, other possibilities include a two-door convertible and R-badged performance saloon powered by a turbocharged V8.

If they are given the go-ahead, the new models could go into production in late 2009.