More for you |
DVLA warns of 20% increase in car scamsWhat Car?'s top 10 used electric cars (and the one to avoid)10 most unreliable SUVsWhat Car?'s best cars for less than £250 per monthGuaranteed discounts on our 2020 Award winners - save up to £19,366
Home
News
Ford and Honda join scrappage scheme
news 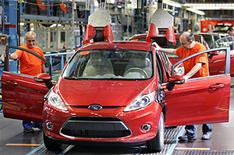 Ford and Honda have resolved their dispute with the Government and have confirmed that they will now join the UK scrappage scheme.

Ford had stopped deliveries to its dealerships and Honda had told its dealers to suspend registrations for new vehicles under the scheme.

The manufacturers had both expressed concerns over VAT payment arrangements.

However, Honda has now confirmed it would enter the scheme 'following discussions between industry and Government yesterday and clarification on the finer detail'.

Nigel Sharp, Ford's managing director for Great Britain, also confirmed it would join the scheme: 'Ford is putting its full weight behind the UK vehicle scrappage scheme, which will not only boost sales, but will also bring positive employment and environmental benefits too.'

Ford also confirmed it had taken 3000 new orders from first-time customers since the scheme came into effect yesterday.

Under the UK scrappage scheme, motorists are offered a 2000 incentive to scrap cars that are over 10 years old, with half the cash paid by the Government and half by the manufacturer.