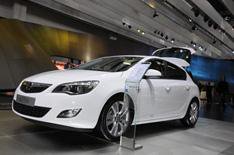 Vauxhall's all-new Astra is here in the metal at the Frankfurt motor show, but will it be enough to woo the public and help save the troubled manufacturer?

What is it?
The sixth-generation Astra comes with Insignia-inspired design and a high-quality build; thing is, though, is it up to the challenge set by the recession-hit motor industry and the 'environmentally aware' consumer?

What's new?
The most notable and pertinent upgrade is the Astra's greener engine range. The eight-engine line-up will be made up of five petrol and three diesel units.

Petrol engines
An 84bhp 1.4-litre petrol engine with CO2 emissions of 129g/km will be the entry-level point, followed by a 99bhp 1.4 then a 138bhp turbocharged 1.4 that matches the current car's 1.8 petrol for power, but has lower CO2 emissions and 15% more torque.

There are two 1.6-litre petrols one with 113bhp and a turbocharged 178bhp version.

Vauxhall's green brand, Ecoflex, will join the range in 2010. It's expected to use a version of the 1.3 diesel, but with tweaks to the suspension, gearing and aerodynamics resulting in CO2 emissions of just 109g/km.

Classy interior
As with the exterior, the design has been influenced by the larger Insignia's, with swooping shapes, a recurring 'blade' motif and a distinctive wrap-around dashboard.

The classy look is enhanced by ambient lighting and lots of metallic trim. Vauxhall says that the aim was to make the Astra's interior quality a match for the Insignia's.

Practicality was also a major goal. Vauxhall says that it researched the 20 most common items that are likely to be stored on board and came up with solutions to accommodate them.

The glovebox has two removable compartments, for example, and the centre console can accommodate nine CD cases. There's a second smaller glovebox below the light switch, too.

Vauxhall also says that the new Astra's seats have 'industry-leading levels of adjustment'. It says the front seats can be raised by up to 65mm, with a 280mm range of fore and aft adjustment.

On the road
The Astra rides on the same platform as the Chevrolet Cruze and uses a revised version of the old Astra's rear suspension. However, the new car has a wider track front and rear, so stability and agility should be noticeably improved.

Astra buyers can also opt for the Insignia-style FlexRide adjustable shock absorber system. Select from standard, sport or tour mode at the touch of a button. Adaptive front lights and road sign recognition will also be on the options list.

How much and when is it on sale?
The new Vauxhall Astra - built at Vauxhall's Ellesmere Port factory - will cost from 15,675 and it goes on sale in December 2009.