* GM and Peugeot-Citroen form alliance * GM to buy a 7% stake * Will share tech for new models... 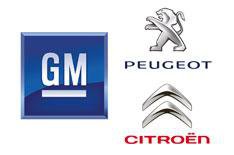 GM and PSA Peugeot Citroen have announced details of a new alliance that will see the companies co-develop future models. As part of the deal, GM will acquire a 7% stake in the French company.

GM which owns Vauxhall and PSA Peugeot Citroen are currently reporting large losses in Europe. Under the new agreement, the companies will reduce the cost of developing new cars by sharing platforms and the creation of a purchasing joint venture for components, goods and services.

As part of the deal, PSA Peugeot Citroen is expected to raise approximately 1 billion through a share issue. GM will take a 7% stake, making it the second largest shareholder behind the Peugeot Family Group.

Initially, the agreement will focus on 'small and mid-size passenger cars, MPVs and crossovers'. The companies will also consider developing a new common platform for low-emission vehicles. The first vehicle on a common platform is expected to launch by 2016.

According to an official statement, the total savings could amount to as much as 1.26 billion annually within five years.