* New Honda Civic Type R confirmed * Could get a turbocharged engine * Goes on sale in 2015... 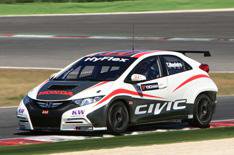 A new Honda Civic Type R will go on sale in 2015, Honda has confirmed.

Honda launched the latest Civic in 2011 as a five-door model only and there was speculation that there would be no Type R model.

The launch of the new Type R is likely to coincide with a mid-life face-lift for the Civic range. The new hot hatch will be available only with five doors.

Honda says the new Civic Type R will be influenced by the Civic World Touring Car Championship (WTCC) car (pictured), which suggests that it will get a turbocharged engine for the first time.

The WTCC car has a turbocharged 1.6-litre petrol engine and the Type R could get a version of this. Honda's previous Type R models have all used high-revving naturally aspirated VTEC petrol engines.

No technical details have been released, but Honda says it aims to set the fastest time for a front-wheel-drive vehicle on the Nurburgring race track in Germany with the new Civic Type R. Rumours suggest the Type R could get more than 250bhp, to compete with cars such as the Ford Focus ST, Renault Megane 265 Cup and Vauxhall Astra VXR.

There are no details on specification yet, but we'd expect the Type R to get a bodykit and interior upgrades, and modified steering and suspension.

Earlier this week, Honda announced details of a new Honda Civic Ti special-edition model this week, which has a number of sporty cosmetic upgrades, but no power or chassis tweaks.