More for you |
New issue of What Car? magazine on sale nowPromoted | 5 reasons why it makes sense to go electric todayBig savings on our Car of the Year Awards winnersWhat Car? Awards 2021: The best cars you can buy2021 Nissan Qashqai: electric and hybrid power revealed
Home
News
Hot Kia Pro_Cee'd on its way
news

Hot Kia Pro_Cee'd on its way 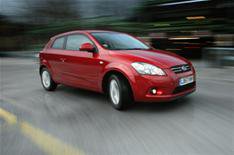 Kia has said it will build a hot-hatch version of its recently launched three-door Pro_Cee'd small family car.

A Kia insider said there was agreement 'at the highest level' to build a flagship Pro_Cee'd, but that the company needed time to develop it properly.

That means we won't see the car before the range gets its mid-life face-lift, which will probably happen in the next two or three years.

Company insiders have said that the chassis is capable of handling engines with over 180bhp, and they have already played around with the suspension settings, which give promising better grip and sharper handling.

However, the Cee'd Convertible concept car shown at the Frankfurt motor show last September is less likely, because there isn't enough spare capacity at Kia's factory in Slovenia to build it.