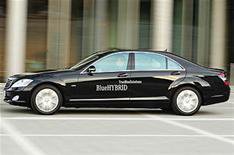 Mercedes will introduce one new hybrid car every year, starting with the flagship S-Class later in 2009, chairman Dr Dieter Zetsche said in a bullish speech on the eve of the Detroit motor show.

He also promised that Mercedes' new-model programme will not be trimmed as a short-term cost-cutting measure in the current recession.

'We have no intention of eating our seed-corn. We will not put our long-term plans at risk by cutting back on our product strategy,' he promised.

'Every auto maker is feeling the pinch, but what people must remember is that we are victims of the recession, not the cause of it. I have a lot of confidence that there is a bright future for innovative car companies.'

Mercedes is hitting the show with the first of three planned electric car concept under the Blue Zero banner and the run-out SLR McLaren-Mercedes named in honour of Sir Stirling Moss.

Last night it revealed the new E-Class at a pre-show gathering.

Dr Zetsche promised that when the hybird S-Class appears later this year 'it will be the most fuel-efficient luxury vehicle in the world' with average of economy of nearly 36mpg.

'We will continue to optimise the internal combustion engine because it will remain the backbone of personal mobility for the forseeable future, but this will also involve hybridisation of drivelines and we are announcing there will be a new Mercedes hybrid every year,' he said.