More for you |
Shouldn't Hyundai replace my leaky ix20? Hyundai reveals prices for ix20Hyundai iX20Hyundai ix20 to cost from 11,400How to spec a Citroën Berlingo
Home
News
Hyundai to unveil its ix20 at Paris show
news

Hyundai to unveil its ix20 at Paris show 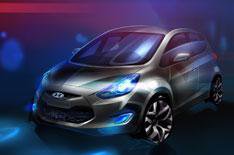 Hyundai will launch its ix20 a new mini-MPV at the Paris motor show later this month.

The ix20 will give the company a rival to the Citroen C3 Picasso and Nissan Note, as well as the new Toyota Verso-S, which will also be launched at the show.

Designed and developed in Germany, the ix20 is the companys second car after the ix35 crossover to adopt what it calls its fluidic sculpture design.

'Striking' design
As yet, the company has issued only this initial sketch of the car, but it says that the ix20 is 'a striking departure from the boxy "minivan" image typically associated with the segment, adopting a more dynamic, sportier profile'.

Hyundai also says the car will be both practical and fun to drive, and that it is expected to go on sale in November this year.

Updated i10
Also making its debut at the Paris motor show is an updated version of the i10 supermini. Featuring revised styling and specification, as well as a new 1.0-litre engine, which emits just 99g/km of CO2, it will go on sale in January next year.