More for you |
What Car?'s top 10 used electric cars (and the one to avoid)10 most unreliable SUVsWhat Car?'s best cars for less than £250 per monthGuaranteed discounts on our 2020 Award winners - save up to £19,366Skoda Kamiq long-term test review
Home
News
Kia Cee'd hybrid on the way
news

Kia Cee'd hybrid on the way 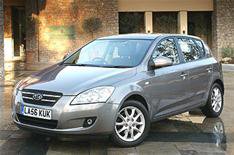 Kia is planning a mild hybrid version of the Cee'd hatchback. The aim is to offer it as a relatively low-cost model to rival the Honda Insight, which went on sale earlier this year. The Cee'd hybrid is likely to appear in the UK in 2011.

The hybrid mates a standard 125bhp 1.6-litre Cee'd petrol engine with a 20bhp electric motor, driving through a continuously variable automatic transmission. The result is better performance than the petrol-only car, with lower carbon dioxide (CO2) emissions than would be possible with a larger engine.

The electric motor isn't capable of powering the Cee'd on its own, but provides a performance boost under hard acceleration and greater torque at low revs. The electric motor's batteries are also charged using energy regeneration during braking and deceleration.

No fuel economy or CO2 figures are available yet, but the hybrid Cee'd would almost certainly fall into the lowest road tax and company car tax bands.

Kia believes that the UK market for the car is likely to be relatively small, but regards its introduction as an essential step in the development of a plug-in hybrid and ultimately a hydrogen fuel-cell car.