Owning an SUV doesn't have to cost a fortune, as proved by both the Kia Sportage and Mazda CX-5\. The winner will need to be spacious, practical and good to drive... 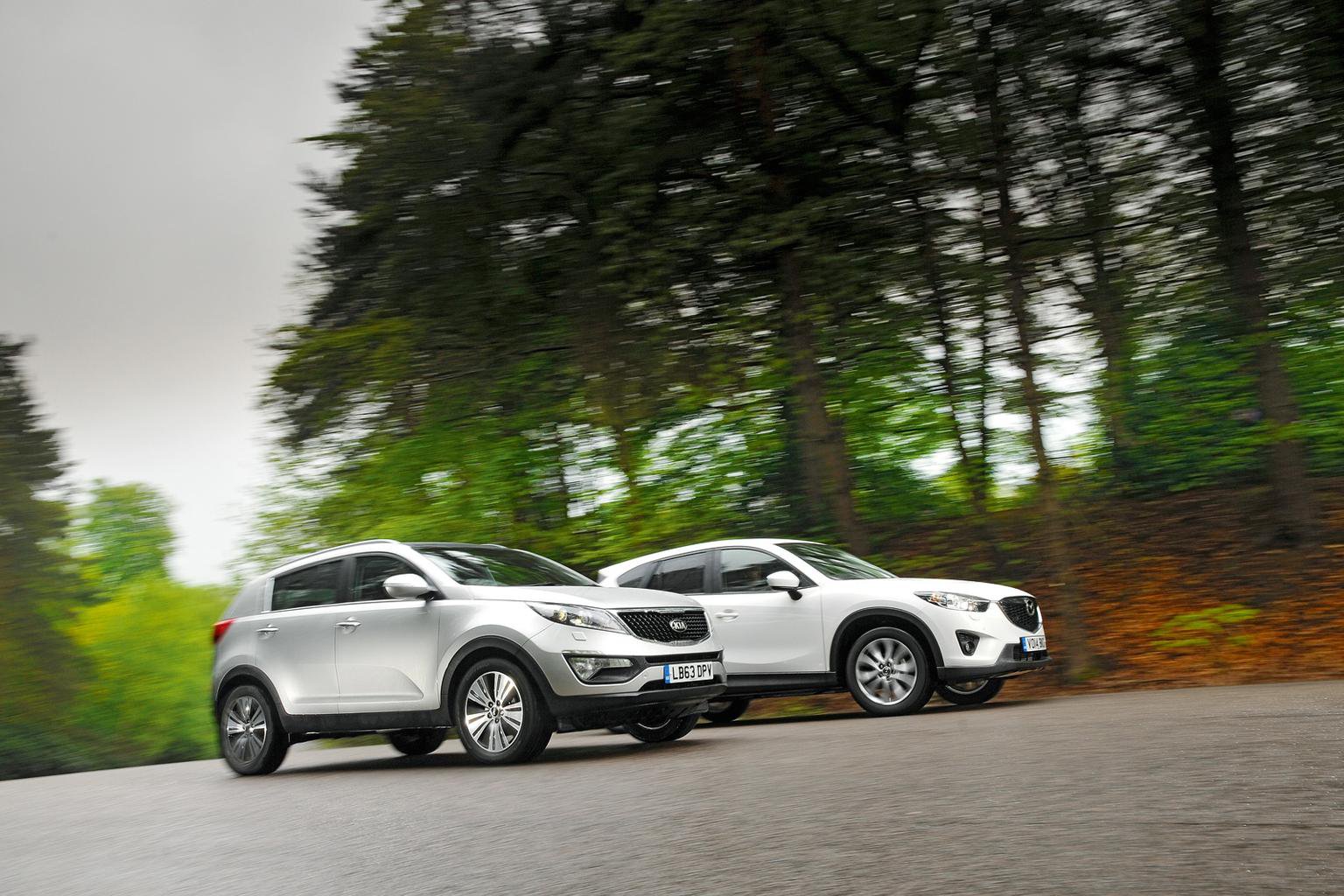 The Kia Sportage has always been a bit of a looker, but its SUV rivals have left it behind in a number of areas. That’s why it’s been given a refreshed interior, softer suspension and more kit.

To find out how successful the changes have been, we’re pitting it against the Mazda CX-5, which has long been one of our favourites and which has also been tweaked. The CX-5 offers some of the best fuel economy and CO2 figures of any SUV, while being spacious, well equipped and keenly priced.

There’s a David and Goliath look to the engines, because the Kia’s 1.7-litre unit is dwarfed by the Mazda’s 2.2. As you’d expect, the more powerful CX-5 is quicker in an outright sprint, and is the more flexible overall. The difference isn’t huge, though, because the Sportage starts pulling from lower revs (around 1300rpm), and has shorter gearing, so it feels reasonably on the pace in day-to-day driving.

The Kia’s engine is noisier, though, even at a cruise, becoming extremely gruff when worked hard. You’ll also hear the CX-5’s engine when you rev it, but at least it sends fewer vibrations through the controls.

It’s easier to drive the Mazda smoothly, mainly because it has a slick gearchange and pedals that are neither too heavy nor oo light. By comparison, the Kia’s gearbox is notchy and downright frustrating when you need to change gear quickly.

The Mazda also handles better, because its body remains more composed and its steering is the more precise and gives better feedback. You immediately notice that the Kia’s body leans more and its steering feels over-assisted and vague. Large bumps also tend to thump into the Kia’s cabin, causing the body to shimmy incessantly over broken surfaces.

The CX-5 still feels firm over sharp-edged potholes and expansion joints, although it’s much more controlled than the Kia at high speed.

In fact, motorway journeys are generally more relaxing in the Mazda, because although its door mirrors kick up some wind noise, its engine is the more settled.

In both cars you use a lever to adjust the backrest of the front seats in set increments. This is never as precise as using a dial to set the seat in just the right position. Still, both driver’s seats come with manual lumbar adjustment for perfect posture.

There’s plenty of head- and legroom in the front of both, but rear space is more one-sided, because the Mazda has more head- and shoulder room. The Kia’s headroom is undoubtedly hampered by the standard panoramic sunroof, although it matches its rival’s legroom.

Both boots will accept a couple of large pushchairs, but while the Sportage’s doesn’t accept a set of golf clubs with the driver in place, the CX-5’s swallows them without fuss. In fact, the CX-5’s boot isn’t just taller, wider and longer than the Sportage’s, it also has a wider opening – and sits closer to the ground, so lifting heavy, bulky items inside is easier.

Should you need more space, the Mazda’s spring-loaded rear seats are the easier to fold using levers on the sides of the boot. Once down, they lie flatter, and they also split in a useful 40/20/40 configuration. The Kia’s rear seatbacks aren’t particularly heavy, but you have to walk to each side of the car to reach the levers that fold them. They are split 60/40, so aren’t quite as versatile as the Mazda’s.

Kia has improved the quality of the Sportage’s cabin with its face-lift, with more soft-touch plastics on the dashboard and upgraded materials in the places you come into contact with. However, the CX-5’s dashboard looks and feels classier still, with piano-black surfaces and plastics that feel sturdier. That said, it’s still a way behind the best SUVs.

The Sportage costs around £200 less than the CX-5, but the gap narrows after discounts. There’s more than £1500 available off the Sportage, but around £1700 off the CX-5.

The Kia is predicted to be worth around £500 more after three years, and although its servicing and road tax costs are higher, our True MPG results show it’s cheaper to fuel in real-world driving. Ultimately, it ends up costing a private buyer £1200 less than the CX-5 to own over three years.

On the other hand, company car drivers will be better off with the CX-5. Its 119g/km CO2 figure means it sits five tax bands lower than the Sportage, saving a 40% taxpayer around £400 every year.

Both have been crash-tested by Euro NCAP, and received a five-star rating. Look more closely, though, and the CX-5 does the marginally better job of protecting adults and children inside, and is better at protecting pedestrians. Each gets six airbags, but only the CX-5 has a system to stop you having a crash in low-speed traffic.

The Kia Sportage looked good when it was launched in 2010, but SUVs have moved on leaps and bounds since, and this face-lift isn’t enough make up the lost ground. It still makes plenty of financial sense and is well equipped, but it falls down in key areas.

Those areas are exposed by the CX-5, which is better to drive, roomier and more practical, refined and comfortable. Our True MPG tests show it costs more to fuel, but not by enough to outweigh the usefulness of its more powerful engine.

Verdict Still one of the very best SUVs

Verdict Improved, but not by enough to win here