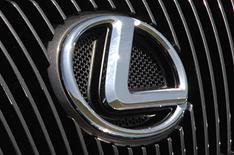 Lexus is recalling more than 15,000 cars in the UK for checks on the brakes and the fuel systems.

IS, GS and RX brake fault
Lexus wants to check the brakes of 15,400 IS, GS and RX models built between February 2003 and November 2005. It has found that the seal between the brake master cylinder and brake booster could allow fluid to leak.

Owners experiencing this fault would be alerted by a low brake fluid warning light, but would have full braking power for a further 200 miles of driving.

The recall involves checking the seating of the seal, replacing it if required and dealing with any contaminated fluid.

GS fuel pump issue
The second recall involves the fuel pump on 2081 GS models built between September 2004 and February 2006. Expansion and contraction of the fuel tank can stress the wiring harness of the pump and lead to a break in the circuit. This would cause the fuel pump and engine to stop without warning.

The repair involves replacement of the harness, a job which takes around three hours.

Lexus says that it is unaware of any accidents that have been caused as a result of the potential faults. All remedial work will be carried out at no charge to the owner.