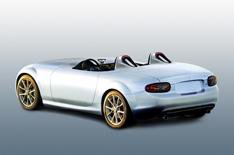 This could be the supreme Mazda MX-5.

Its the new MX-5 Superlight concept, which Mazda will unveil to the public at the Frankfurt motor show on September 15.

Lightweight technology
The pictures reveal a lightweight version of the standard MX-5 roadster, which is designed to produce a quicker, more efficient car.

The most striking difference over the standard car is the absence of a traditional windscreen or front pillars, which in turn means theres no roof. There are bespoke roll-over hoops behind the seats, however.

Anniversary year
The Mazda MX-5 celebrates its 20th anniversary this year and, to celebrate, Mazda has launched a '20th Anniversary special-edition model in Japan.

Based on the 2.0-litre version, it has unique red and black Recaro seats, special badges and clear front foglights. Its available in one special colour only crystal white pearl.

It won't be sold in the UK, but Mazda is expected to launch a UK-specific special edition later.