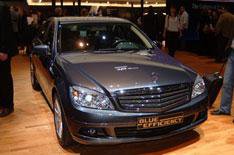 Mercedes will begin introducing so-called clean diesel engines to the UK in less than three years, which is good news for the air quality in our towns and cities, but less so for company car-tax payers.

The company's latest Bluetec technology will eliminate the majority of exhaust emissions of nitrous oxides (NOx), hydrocarbons and particulates - which have been linked with breathing problems, cancer and heart diseases - but increase carbon dioxide (CO2) output.

'The increase in CO2 is slight and would put cars only one band higher for company car tax, but for some people that could mean an increase of 30 or 40 a month in what they pay,' admits Wilfried Steffen, the president and CEO of Mercedes-Benz UK.

However, clean-diesel technology is inevitable if the engines are to meet European emissions regulations that will come into force in 2014, and Mercedes thinks it better to bite the bullet and bring it in early.

'Part of our job is to educate people that there is a difference between pollution, which comes from NOx, hydrocarbons and particulates, and CO2, which is non-polluting but affects global warming,' says Steffen.

The latest diesel technology was introduced yesterday at the New York auto show and will initially be available only in America on 3.0-litre V6 diesel versions of the R-, M- and GL-Class 4x4 models. C-, E- and S-Class ranges will get it in time.

The system involves treating exhaust gases with a liquid called urea, which is stored in a separate tank. This helps breaks NOx down into harmless nitrogen and water, while filters and catalytic converters trap hydrocarbons and soot particulates.

Urea is used at the rate of only one litre per 600 or 700 miles, so with a 26-litre tank a refill would be needed only at routine service time.

The technology is likely to add around 750 to the cost of a car at today's prices.

There are no immediate plans also to introduce it to the company's four-cylinder diesels, though it will have to be done by 2014 if they are to meet Euro 6 emissions rules.