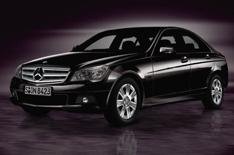 A new special-edition Mercedes-Benz C-Class is aimed at tempting buyers away from the likes of an Audi A4 or BMW 3 Series.

The Mercedes C180 Executive SE is powered by a 154bhp 1.8-litre petrol engine. Unlike other SE-spec C-Classes, this one has Mercedes' three-pointed star in the grille.

It also comes with new 16-inch alloy wheels and chrome trim on the boot lid and exhaust. Unlike standard SE models, the Executive SE gets voice-controlled sat-nav as standard.

Mercedes isn't setting a trend with this kind of model, which is aimed at business car buyers. Audi already has the 23,700 A4 1.8 TFSI Executive SE, and BMW has its 318i SE Business Edition, which costs 23,820.