* Longbridge reported to be re-opening * Chinese owners visit site and give go-ahead * MG TF first, then Roewe 550 may follow... 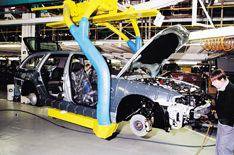 Production of the MG TF at Longbridge in Birmingham is set to resume in July.

That's according to the Birmingham Post, which reports that senior officials from owners Shanghai Automobile Industry Corporation (SAIC) have now visited the site and given their go-ahead for work at the plant to resume.

Car-building was originally delayed by concerns over quality and then the merger of original owner Nanjing Automobile Corporation with the larger SAIC.

SAIC is said to be working on a long-term strategy for car contruction in the UK. These include full production of the TF, rather than the assembly from pre-fabricated Chinese-made kits as originally planned, and making MG-branded versions of the Roewe 550.