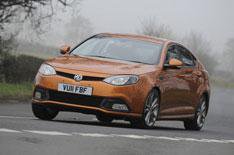 MG has started production of its new MG6 at the Longbridge production plant in Birmingham.

Other models are in the pipeline from the manufacturer, although many are expected to be imported from China rather than built in Birmingham. This includes an MG3 supermini due next year.

Although production has started at Longbridge today, the tsunami tragedy in Japan continues to have far-reaching effects around the world and has hit other car plants in the UK. Production at both the Honda plant in Swindon and the Nissan factory in Sunderland has been cut to cope with parts shortages caused by the earthquake.