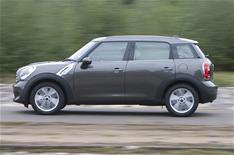 What is it? This is the entry-level diesel-engined version of the Mini Countryman, which comes with two-wheel drive only. Priced from 17,460, its cheaper than the equivalent diesel Cooper model, but averages the same 64.2mpg.

The price you pay for that saving is that the Ones engine develops just 89bhp, rather than the Coopers 110bhp, which is enough to add another two seconds to the 0-60mph sprint, taking it to 12.9 seconds.

Whats it like to drive? Given that this is the entry-level version, its perhaps surprising just how smartly the Countryman performs. Around town, the relatively short gearing and strong pull from as little as 1800rpm mean it feels quick, though.

Sadly, that impression doesnt quite continue when you head out of town the Ones performance isnt as strong at higher speeds. It never feels short of pace on the open road, though, and cruises happily on the motorway.

In other respects, the One is no different from any other Countryman, which is rather disappointing. Its not as enjoyable to drive as the equivalent VW Golf, with an unsettled ride that can be genuinely uncomfortable around town, and sharp steering that is at odds with amount of movement the suspension allows in the body. Turn the wheel that little bit too keenly and the body can lurch over alarmingly.

Refinement, too, is a little disappointing. Around town, the engine is gruff and noisy when you rev it, and on the motorway theres too much wind- and road noise.

Whats it like inside? As you would expect, the One is the same as any other Countryman inside. The dash design puts form above function, so its far from the most user-friendly set-up and takes a lot of getting used to.

The cabin has plenty of space up front, but the best you can say about the rest of the car is that its the most practical Mini which is not saying much. Despite having sliding rear seats, you cant have decent space for both passengers and luggage at the same time. Also, although the rear bench will technically take three passengers, in practice the central passenger will feel cramped.

Should I buy one? Theres nothing fundamentally wrong with this version of the Countryman, but the crucial figure is probably not that it costs so much less than the Cooper, but that it costs more than 1000 more than the petrol-engined One.

With that version averaging a creditable 47.1mpg, youd need to have a high annual mileage before the diesel One starts to make long-term economic sense through its greater fuel economy. So, even if you want a Countryman, this isnt the best model to choose.

However, wed question whether a Countryman is the right car to choose in the first place. Yes, its more stylish and distinctive than mainstream rivals such as the Ford Focus and VW Golf, but both of those are better to drive and more practical.

A Countryman may well fit the bill for some motorists, but we think the likes of the Golf and Focus will be more appealing to more buyers.