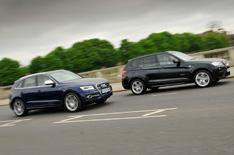 The Audi SQ5 is a rather unconventional performance car, because it's based on the company's Q5 SUV and uses a diesel engine.

To see how good the SQ5 is, we're testing it against the fastest diesel version of our reigning SUV of the Year, the BMW X3.

What are they like to drive?
It's a bit disconcerting being able to accelerate so quickly while looking at everything from the motoring equivalent of a first-floor window.

These cars both have more than enough straight-line oomph to leave any hot hatch owner feeling second best, but it's the Audi that has the edge; it'll blast from 0-62mph in just 5.1 seconds, whereas the BMW takes 5.8 seconds.

The tables are turned when corners enter the equation, because the BMW has the more natural-feeling steering, and it responds to your steering inputs more immediately.

That said, it's the SQ5 that has more grip and is less deflected by mid-corner bumps.

Both cars avoid the traditional SUV pitfall of excessive body roll, and while both are undeniably firm, the BMW is better at dealing with the sort of B-road bumps that the UK is famous for.

Where the BMW can't compete with the Audi is in aural drama; its straight-six engine sounds grumbly at low revs and becomes harsh and thrashy when you extend it.

By contrast, the Audi is fitted with a sound-actuation system that makes its 3.0-litre V6 diesel sound for all the world like a big petrol V8. So, while the SQ5 isn't the quietest thing, it makes the sort of noises that you'll enjoy hearing.

Each car has an eight-speed automatic gearbox that's smooth and quick to respond.

What are they like inside?
Both of these SUVs are spacious enough to keep four six-footers happy, and while the BMW has a slightly bigger boot, the Audi's will be practical enough for most needs.

The BMW has more of an advantage when it comes to perceived quality, because its cabin is impeccably built from top-quality materials.

True, the Audi feels well put together, but some of its switchgear and trim feels less substantial.

The BMW also has the more user-friendly infotainment system, because it features slightly simpler menus and eight programmable shortcut buttons.

However, the Audi's system is still better than most, and both cars are comprehensively equipped, getting climate control, leather upholstery, satellite-navigation and Bluetooth music streaming and mobile phone connectivity.

Will they break the bank?
These might be high performance cars, but they're still pretty efficient.

The Audi does average economy of 41.5mpg and qualifies for the 30% company car tax band, while the BMW is even more impressive; it averages 46.3mpg and sits a full three tax bands lower than the Audi.

The BMW also undercuts the Audi by 975 a gap that narrows by only a few hundred pounds once dealer discounts are factored into the equation. What's more, it's likely to be cheaper to service.

True, the Audi counters with lower insurance premiums and slightly stronger resale values, but overall it will cost you more.

The BMW wins (just) because it's almost as quick as the Audi, it steers and handles better, and it feels that bit classier. However, anyone who goes for the Audi will still be getting a cracking car.

Is there a BMW X3 rear-view camera theft epidemic?