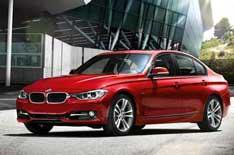 This is the all-new BMW 3 Series, the latest version of BMW's all-conquering compact executive. It has a range of new turbocharged engines, costs from 24,880 and goes on sale on February 11.

Whats new?
The new 3 Series saloon is a a lot longer (9cm) but fractionally lower (5mm) than the previous version. Its also 6mm narrower (excluding the door mirrors). The wheelbase is 5cm longer, to help improve interior space, says BMW.

BMW says that particular attention has been paid to the under-body panels to channel air efficiently, and the 3 Series also uses BMWs Air Curtain technology, which directs air over the wheels to reduce aerodynamic drag at speed. Overall weight has been reduced by around 40kg.

The 320 Efficient Dynamics model has 16-inch alloys and conventional tyres, but the rest of the range has run-flat tyres and wheels of at least 17 inches in diameter.

The standard suspension is a development of the current 3 Series system: M Sport models have a lowered, stiffened version, while Adaptive M Sport suspension with electronically variable shock absorbers will be available as an option.

What engines will be available?
A range of new turbocharged engines provide the power. From launch therell be two petrol versions: the 328i and 335i.

The 328i has a four-cylinder, 242bhp engine and replaces the previous 325i and 330i six-cylinder versions. The 335i has an updated six-cylinder engine. Both are more powerful, but cleaner, than their predecessors.

There will be standard and Efficient Dynamics versions of the 320d model from launch. Both have the same power output as before (161bhp and 181bhp). CO2 emissions for the standard model have dropped from 125g/km to 118g/km, while the Efficient Dynamics' 109g/km isas before.

A six-speed manual gearbox is standard for all models, while BMWs latest eight-speed automatic gearbox is an option across the range. The new auto 'box cuts CO2 emissions by up to 16%.

All variants come with a range of BMW Efficient Dynamics technology, including a stop-start system, brake energy regeneration and low-rolling-resistance tyres.

In the autumn, BMW will launch a six-cylinder diesel model and four-wheel-drive versions. It will also introduce a hybrid model called ActiveHybrid 3. This will be a high-performance model with a combined output of 335bhp and is likely to be the most expensive car in the range.

Whats it like inside?
BMW says the 3 Series will be much more practical, thanks to its longer wheelbase. It claims the new model has an extra 15mm of rear legroom and 8mm of rear headroom over the current car. Boot space has increased by 20 litres to 480 litres.

Having sat in the 3 Series at an exclusive launch event, we can confirm that there's more space than before, but rear headroom remains rather tight for anyone over 6ft.

The dashboard design is similar to the latest 5 Series, with a simple layout and a centre console angled towards the driver. All models not just those with optional sat-nav now come with BMWs iDrive control system.

Prices and equipment
BMW has increased the number of trims. As well as the previous ES, SE and M Sport variants, there will be Sport, Modern and Luxury models. BMW says the additional versions meet the needs of customers that are demanding 'an increasing level of individualisation.'