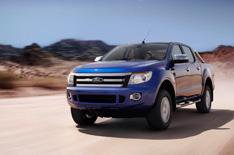 Ford will reveal a string of new cars at the Geneva motor show in March, including an all-new Ranger pick-up.

The Ranger will go on sale in the UK towards the end of the year, and Ford says it has concentrated on making it more fun to drive as well as safer.

An all-new small car will also make its first appearance at the show. Likely to be a replacement for the Fusion supermini, Ford say the newcomer is 'groundbreaking'.

The Vertrek concept car seen at the Detroit motor show hops over the pond to make its European debut and shows us what the next-generation Kuga is going to look like.

Also on display for the first time in Europe will be the all-electric Focus which goes on sale in 2012 along with the plug-in hybrid version of the C-Max MPV that's due in 2013.