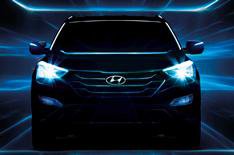 The all-new Hyundai Santa Fe 2012 has been revealed, with more photos released ahead of its public debut at the New York motor show next month.

Hyundai released 'teaser' images of the all-new Santa Fe earlier this month; the new images flesh out the picture.

Although the whole of the car isnt shown, there are details that show a look similar to Hyundais ix35 SUVs.

The new Santa Fe is likely to follow the same formula, however, with aggressive pricing, standard four-wheel drive and a choice of five- or seven-seat layouts.

An updated version of the current cars 2.2-litre diesel is likely to be the only engine available: wed expect efficiency gains to give lower CO2 emissions and improved fuel economy.

Although it will be called Santa Fe globally, there are rumours that the new model could be named ix45 for Europe. The new model is due on sale in the UK in late autumn, priced from around 24,000.